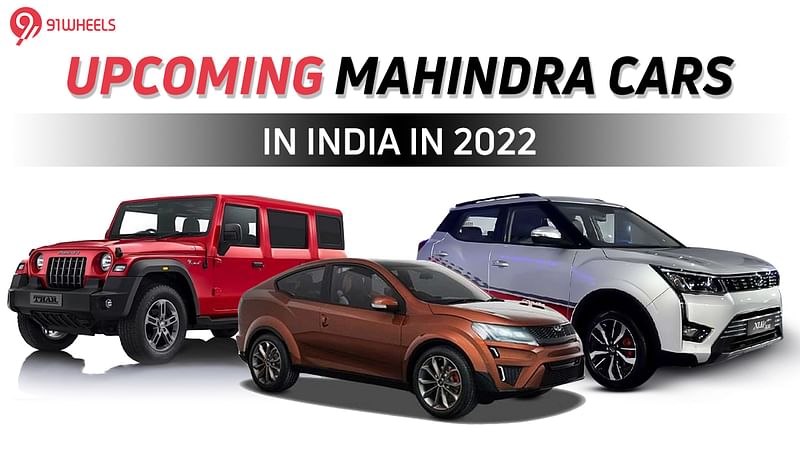 The launch of the XUV700 and Thar was surely exciting, but that was just the start. Mahindra & Mahindra has a slew of new launches the next year.

Mahindra & Mahindra has surely made quite the comeback with the XUV700 and the Thar. This year also saw the birth of the Bolero Neo in the form of a rebadged TUV300. However, as it goes, Mahindra has quite the list of models still awaiting launch. Below is the list of those Upcoming Mahindra Cars in India 2022, but before that, do join our  91Wheels Telegram and 91Wheels Whatsapp group to get the latest news from the industry!

Upcoming Mahindra Cars in India till 2022

The sporty variant of the XUV300 with a 130 hp mStallion petrol engine was first showcased at the Auto Expo 2020. The displayed model featured cosmetic upgrades like red brake calipers, decals on the front door and rear door with the letters Sportz, etc. The launch of the mid-variant XUV300 Turbo Sportz was initially supposed to happen in April 2020, but it got postponed. The turbo model will now launch in early-2022 with an estimated price tag between Rs. 7.95-Rs 13.33 lakh (ex-showroom, Delhi). Furthermore, reports also reveal that post-launch, the 130hp, 230 Nm, 1.2-liter engine will also be sold with other trims.

Mahindra & Mahindra has been vested in the EV business longer than any other manufacturer and the second model on our list of Upcoming Mahindra Cars in India 2022 is an EV that's been on test for many years now. The eKUV 100 will be the first mass-produced, 5-seater, four-door SUV. The production-spec eKUV 100 has been spotted before, and it is expected to launch in March 2022. This electric SUV will come fitted with a 15.9 kWh battery that will power an electric motor to produce 54.4 hp and 120 Nm of torque. All in all, the eKUV 100 has a range of 150 km and it can get fully charged in just 5 hr 45 mins. EVs are going to be the future, and their popularity is crucial. The Mahindra eKUV 100 is expected to be priced between Rs. 9 lakh to Rs. 13. Lakh. In this price range, the Tigor EV is the sole contender at Rs. 9.58 lakh.

The XUV300 will also get its electric iteration, although it is not sure if Mahindra will name it XUV300 Electric or XUV400. The XUV300 will be the first EV to be based on Mahindra Electric Scalable and Modular Architecture (MESMA). The production model will be available in two variants 350V and 380V, alongside, two battery packs. The affordable model will compete against the likes of the Nexon EV, while the expensive one will compete against the Hyundai Kona. The eKUV100 is expected to start from Rs. 18.00 lakh, and will launch sometime around December 2022.

The Scorpio badge is one of the most anticipated launches from Mahindra. Disguised models being tested on Indian roads have already been spied many times before. And if those pictures are to go by then the new SUV packs in quite the upgrade, both interior, and exterior. Mechanically, the 2022 Scorpio might be powered by a 155 bhp, 360 Nm engine and a 150 bhp, 300 Nm engine. In addition, theres also a rumour that the Scorpio will get multi-terrain drive modes with Rock, Snow, Mud, alongside a 4WD version too. The Scorpio is easily one of the most awaited Upcoming Mahindra Cars in India 2022.

Also Read: Heres Everything You Need To Know About The New Mahindra Furio 7

The Mahindra XUV Aero debuted way back at the 2016 Indian Auto Expo, which might finally see the light of production. It is expected to launch in February 2022 and an estimated starting price of Rs. 17.00  Lakh. Back then when Mahindra debuted the Aero, they were merely enticing its customers and testing the waters. With the growing popularity of the XUV range and SUVs in general, the XUV Aero is surely an interesting product that awaits launch. The Aero Concept is based on the XUV500, which is now no longer in production. It gets a swooping roofline with suicide doors just like a Rolls Royce. Whether that last feature carries over onto the production model remains to be seen.

The Mahindra e20 NXT is another EV from the Indian marquee that they debuted at the 2018 Indian Auto Expo. It is expected to launch in November 2022. The powertrain details has not been confirmed as of yet, but the overall body stying has plenty of design elements common with other Mahindra cars.  The e20 NXT is expected to be priced from Rs. 6.00 lakhs (ex-showroom price, Delhi) and is among the most promising of the Upcoming Mahindra Cars in India 2022.

The 5-door version of the Mahindra Thar is a really exciting proposition that will compete against the upcoming Maruti Suzuki Jimny. It is expected to launch in 2023.

Which one of these upcoming Mahindra cars in India 2022 are you waiting for? Let us know in the comment section. You join our 91Wheels Telegram and 91Wheels Whatsapp group to know more about vehicles, conduct discussions on your favourite ride and much more! Also, you can subscribe to our Youtube channel for 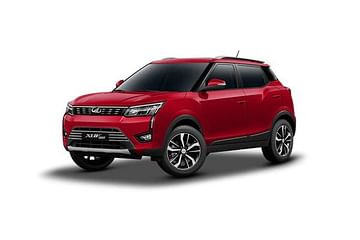 XUV300 Turbo Sportz is a SUV car from Mahindra. Mahindra is expected to be launched at a price of Rs. ₹ 12.34 Lakh in Indian automobile market.