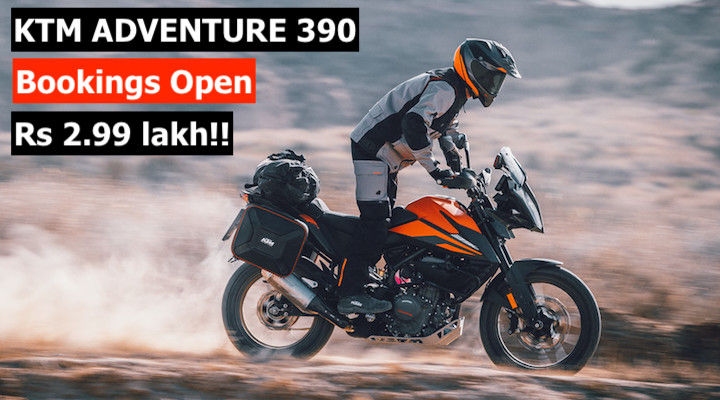 It is finally here! Adventure seekers have been waiting for this bike endlessly but good news has come our way. KTM Adventure 390 Price starts at Rs 2.99 lakh (ex-showroom) and you can now book this bike right away. This has to be the best news coming from Bajaj in the past few years for Indian motorcycling enthusiasts.

The KTM Adventure 390 gets the same engine as its naked sibling. This means you get 43 horses to play with, along with 37 Nm of torque to smash through dirt trails and Himalayan roads. And it is no co-incident that Royal Enfield launched the BS6 Himalayan just a few hours back with prices starting at Rs 1.86 lakh - read report here. Ofcourse the 390 is way more powerful, enjoyable and a maniac on two wheels.

In India, the KTM Adventure 390 gets enough features to keep mile munchers happy. It has a lightweight Trellis frame and the long travel WP suspension offers 170mm of front and 177mm of rear travel. And then there are the knobby Metzeller tyres, ample clearance of 200mm, a windshield that can be pulled up and a proper bash plate for the engine. But we arent done yet - it gets enough rider aids too. This includes a lean angle sensitive traction control which helps a lot off the road, cornering ABS, off-road ABS and even a quickshifter. Riders can use the MY RIDE app for connectivity and the TFT screen is a work of art.

With its Ready to Race philosophy, KTM has an unparalleled legacy in motorsports with over 300 world championships wins spanning over 66 years. KTM has consistently dominated the most difficult rally on the planet named the Dakar rally, and has won the Championship title 18 times since 2001 with its KTM 450 Rally. The KTM 390 Adventure is inspired from the Dakar winning KTM-450 Rally, deriving much from KTMs rich legacy in Rally Racing in terms of chassis, profiling & several specs such as a larger fuel tank, ergonomics & wind protection to ensure a steady, safe & easy ride on any surface that is on offer.

Fuel capacity stands at 14.5 litres which should be good for about 250-300km of touring. While doing so, you can charge your smartphones via the dedicated 12v outlet and the LED lamps will ensure illumination for crazy late night outings.

Speaking on the occasionSumeet Narang, President (Probiking) at Bajaj Auto Ltd. saidKTM has nurtured a base of over 2.5 lac biking enthusiasts in the last 7 years through its Duke and RC range, offering them technology and performance they had never seen before.The Adventure biking segment in India is starting to pick up steam over the last few years,backed by a widespread motorcycle touring culture. With the new KTM 390 Adventure, loaded with a host of first-in-class features like Cornering ABS, Offroad ABS, lean angle sensitive Motorcycle Traction Control (MTC) and Quickshifter+,we believe KTM will play a pivotal role in building the adventure motorcycle segment in the country. The 390 Adventure will be available through exciting & affordable ownership plans too, the details for which will be made available at the KTM showrooms.