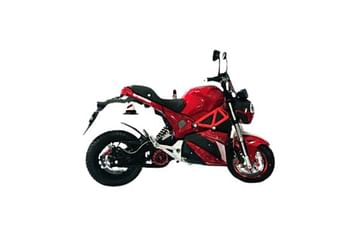 OKHI 100 is a Sports bike from Okinawa. Okinawa is expected to be launched at a price of Rs. ₹ 1.00 Lakh - ₹ 1.20 Lakh in Indian automobile market.

Okinawa has made a decent presence for itself in the electric scooter space. The Okhi 100 will be the EV maker’s first attempt in the new growing electric motorcycle category. The Okinawa Okhi 100 made its debut in the prototype form in the 2018 Auto Expo, and in the 2020 Auto Expo, it was announced for a festive season launch. However, the COVID-19 pandemic delayed its launch, which is now slated to take place in the second half of 2022.

2022 Okinawa Okhi 100 Design
The Okinawa Okhi 100 is a compact electric motorcycle, which has the stance and dimensions similar to monkey bikes sold overseas, something which we have seen in the past with the Honda Navi in India. Taking some design inspiration from a renowned Italian motorcycle, the prototype of the Okinawa Okhi 100 had a rounded LED headlamp with daytime running LED and a red trellis frame, which looks similar to those in the former. Even the chiselled fuel tank and sporty looking tailpiece look inspired by that certain Italian motorcycle. However, the motorcycle teased on the official website misses out on a couple of these design traits to keep the costs in check, such as LED turn indicators being ditched for conventional halogen units. The electric motorcycle will come with small black-coloured wheels, heavy body surrounds for the battery and a digital instrument console with Bluetooth connectivity and smartphone app connectivity.

The prototype of the Okinawa Okhi 100 showcased at the 2018 Auto Expo had a 60 Ah 73 V battery pack, which claimed to have a 0-100% charging time of 2 hours. However, the production model is likely to get a new battery pack, the range of which should be somewhere near 150 km. The 2.5 kW electric motor from the prototype is expected to be retained in the production model. The Okinawa Okhi 100 will be getting telescopic forks at the front and mono-shock at the rear, with disc brakes at both ends.

The Okinawa Okhi 100 will take on other newly launched electric motorcycles Tork Kratos and Komaki Ranger, both of which have very different design languages.

The Okinawa Oki 100 has already been teased on the authorized website of Okinawa India and is expected to be priced in between Rs 1.5-2 lakh.

Have a question in your mind about Okinawa OKHI 100?