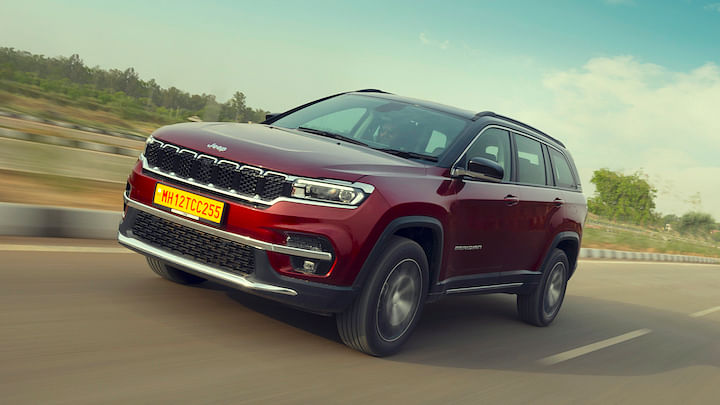 Jeep India has been testing the Meridian 3-row SUV for over an year now. Globally, this is the companys first 7 seater offering for this segment and has already generated a lot of curiosity among prospective buyers and automotive enthusiasts. I had a chance to sample this full sized SUV across various driving conditions and this is my verdict on what could be an easy-to-manage and affordable alternative to the likes of the Toyota Fortuner.

You may hit the play button below or continue to read my review in textual form.

Is it a 7 seater Compass?

Yes and no. While it does share the platform (which is modified here..) with the Compass and the overall silhouette is very much Jeep like, the fact is that the Meridian has its own identity. For starters, it looks large and has a fairly big footprint. In terms of numbers, the Meridian is 364mm longer, 41mm wider and 42mm taller than its smaller sibling. These are significant figures. Likewise, it also has a 158mm longer wheelbase which is evident when viewed from the side.

But its not just the dimensions but the design elements that make the Meridian distinctive. The front is sharp thanks to new headlights and a revised grille. The bumper is new which means different fog lamp housing and altered air-dam.

The side profile showcases the 18-inch alloy wheels that frankly look great. Its high time manufacturers give us good looking wheels in stock form. From the side you also notice slightly flatter roofline and a prominent waist line running into the rear of the SUV.

Talking of which, I personally love the execution of the tail lamps and the horizontal chrome strip. This angle of the Meridian makes it look premium and expensive. Again, the bumper is new and so is the skid plate. In flesh and on the move, the Meridian definitely scores high as far as aesthetics are concerned.

How good is the 2nd space

A lot of Meridian owners will be spending a fair amount of time inside the vehicle and this is where offering a good cabin is important. Getting in isnt a tough task (again, as compared to its 4x4 rivals) and once seated, the first impression is positive. Although the layout is same as the Compass, the choice of colours is different and gels in well for the price point. I love the new seats and view from the drivers throne, something that is important in both urban conditions and off the road.

The Meridian will be offered in top spec trim only and feature wise, this one is loaded. From a panoramic sunroof to a 360 camera set-up, customers will also get ventilation and power function for both the front seats. And then the large infotainment screen that works well and has practical features. The drivers cockpit is full digi and ergonomics remain top notch from both driver and passengers point of view. With my 6 foot tall frame in the front seat, I had good amount of space including decent headroom.

However, the same cannot be said about the second row of the Jeep Meridian. Dont get me wrong - there is good amount of shoulder space and visibility remains good knee room could have been better. Ditto for head space that will be of a concern for my Punjabi friends who wear a turban. And although the seats offer good comfort, the second row does not offer slide function - this could have been useful when traveling with 7 passengers.

The left seat of the 2nd row offers a one touch tumble operation for those getting into the rear seats. Now this space is generally meant for smaller adults or kids and the same holds true in the Meridian. Any one over 59 will have a tough time in the last row due to lack of space. This is one area where some of the other 7 seater rivals may fare better.

The Meridian gets a powered tail gate which gives you access to the boot. The space, as expected, isnt too generous but the last row does fold down flat to liberate quite a large room for airport runs.

Yes, no petrol engine on offer with the Jeep Meridian at launch. It will come with the same 2.0-litre turbo diesel unit that powers the Compass and other SUVs like the MG Hector, Tata Safari, Tata Harrier etc. However, for the additional weight of the Meridian, the tune-up is different. Max power and torque figures remain unchanged (170 bhp / 350 Nm) and both 6-speed manual and 9-speed automatic transmissions are on offer. For the drive experience, we had access to the latter only.

The 9-speed auto sees revised ratios and this is largely responsible for making the relatively small engine feel peppy enough. Part throttle response and overtaking slower moving traffic isnt much of an issue. Yes, this motor is vocal in terms of the diesel clatter but apart from this, the Meridian feels good enough. Pedal to metal, the auto takes its own sweet time dropping a few gears but this lag aside, the engine has enough meat to keep drivers happy.

Thanks to the taller 8th and 9th cog, the Meridian will also be an efficient mile muncher in my opinion. Further, this unit has proven its credentials and long term reliability in the past few years.

Though the Meridian is based on the same platform as the Compass, the underpinnings have undergone major engineering changes. This also includes independent suspension at both the ends and this does make on-road behaviour so much more comfortable. The Meridian rides over bumps, undulations and broken tarmac in a great way and body roll is limited and controlled.

Changing lanes or attacking a corner doesnt make you too nervous and though the steering is light, it carries ample feedback to take care of enthusiasts.

Leaving tarmac and exploring trails is where this 7 seater shows off the true legacy of the Jeep brand. We were driving on stock H/T (highway terrain) tyres with no change to the tyre pressure and yet, our instructors remain pretty confident on what this Jeep could do. This also gets us to the off-road behaviour of the Meridian.

True off the road?

We started off with narrow trails and the tight turning radius as well as good visibility came in handy. The suspension worked well to keep vertical movement in check and then came the adventurous part of the track.

Within minutes, we were climbing stairs followed by a steep uphill dirt road that had by now seen enough action over the days. This meant mini ruts and possible loss of traction. However, the Meridian made it look oh-so-easy. Yes, I had the 4x4 low engaged along with 4x4 lock - the latter ensures 50-50% power transfer to the front and rear wheels.

This was followed by a big drop to the left that was designed to test the articulation and low centre of gravity of the Meridian. For me, being an amateur, this section did seem a bit too hard. However, the Meridian pulled this off without drama, lifting its rear wheel in the progress. The downhill section was long enough for me to test out the downhill descent control as well.

The Meridian does come with impressive approach, departure and ramp over angle. Not once did we touch the underbelly and this included a virgin, natural trail that had rocks, boulders and mini shrubs all over. The entire experience lasted over 45 minutes including multiple inclines, drops, articulation tests and slush wading. The articulation track was where the 4x4 lock came in handy, getting the Meridian up in the air on its side as we drove through the track. This section also displayed the limited flex in the chassis, something that is crucial for a proper 4x4.

I must also add that during our experience, Chandigarh and the entire North belt of India was reeling under a heat wave. Inspite of the massive sunroof, the cabin remained cold enough, even at a standstill and idle rpm. Impressive.

Should you buy one?

Though the Indian market is flooded with SUVs under Rs 20 lakh mark, for those looking at full sized 7 seater options, offerings aren't too many. This is even more true for adventure seekers looking at putting down their money for a proper 4x4, one that is abuse friendly and yet feature loaded and premium enough.

This is where the Meridian steps in. It seems to fill the gap between the smaller Compass and the massive Fortuner. The only piece missing in the entire puzzle is the pricing. If Jeep can get the 4x2 MT at about Rs 28 lakh and the top spec 4x4 AT at about Rs 32 lakh (ex-showroom), they will have a winner here. Watch this space for more..