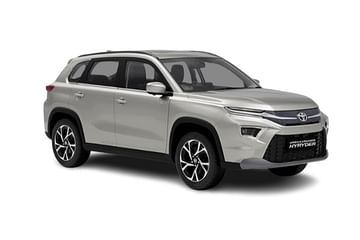 Last Updated On 18th Jul'22: Confused on the difference between the regular Urban Cruiser and the new Urban Cruiser Hyryder? We list these out for you in our detailed article.

Toyota's latest offering is be the Urban Cruiser Hyryder SUV that was unveiled on July 1. This Hyundai Creta rival gets AWD as an option and shares the platform ang engine options with the upcoming Maruti Grand Vitara. This SUV targets the buyers of Hyundai Creta, Kia Seltos, MG Astor, Mahindra Scorpio and Maruti YFG.

This mid-size SUV will be offered in a total of 4 variants with the NeoDrive 1.5 mild hybrid petrol and 3 variants with the HYBRID 1.5 petrol engine. The NeoDrive versions are called E, S, G and V while the 1.5 strong hybrid verisons are called S, G and V. The latter option gets e-Drive (automatic) while the regular engine gets both manual and automatic transmissions.

As expected, the Hyryder will not be offered with a diesel engine. Instead, Toyota has two petrol units for this mid-size SUV. The first is the same 1.5-litre naturally aspirated non turbo engine that powers the XL6 and the Brezza or even the regular Urban Cruiser. This engine will have SHVS or smart hybrid vehicle system. Essentially a mild hybrid, this unit has a separate battery for an electric motor that assists the engine, thereby improving fuel economy. This unit produces 102 PS of power and 135Nm of torque. Both 5-speed manual and 6-speed automatic will be available along with optional AWD reserved for the former transmission. The second engine will be the a similar capacity motor with a strong hybrid set up. This means users will be able to run on EV only mode - something we have seen with the Honda City Hybrid. Combined output will be 115PS along with 122Nm of torque. An e-drive (automatic) will be standard. Expect real world economy of 20-22 kmpl with this one.
Toyota Urban Cruiser Hyryder Features
Toyota understands that this segment has stiff competiton from the likes of the Hyundai Creta and the Kia Seltos. Hence it comes as no surprise that the Hyryder SUV is loaded with features. These include goodies like a panoramic sunroof, smartphone connectivity, wireless chairing, ventilated seats, head up display (HUD), paddle shifters (Automatic), 360 camera and as many as 6 Airbags. Expect a long list of official accessories that customers will be able to pick from the dealer level.
Toyota Urban Cruiser Hyryder Prices
The company is tightlipped on the pricing of the new Hyryder. However, we can expect the range to start from around the Rs 10.5 lakh mark. The top version with the strong hybrid however might kiss the Rs 18 lakh mark easily.
Read More