Toyota Urban Cruiser Hyryder SUV has already made its Indian debut. We now have access to its driving information as well. Read on...

The Toyota Urban Cruiser Hyryder SUV has surely been one of the most awaited car launches for this year. With its debut, Toyota claims that it is going to be one of the best sellers in its segment. Toyota has developed this car in a joint venture with Maruti Suzuki and like the Grand Vitara, it comes with 2 engines and 3 gearbox options. One of our industry colleagues has driven the strong hybrid variant and shared his experience with us.

Considering the fact that it is a sibling car to the Maruti Suzuki Grand Vitara, most of the design looks familiar. However, it is not exactly the same. Toyota has made sure to rework the front end to match its current design layout. The headlight, LED DRLs and the front bumper are different when compared to the Vitara itself. With that said, the rest of the dimensions are the same.

The fact that Toyota offers a dual-tone body colour option makes it look younger. The 17-inch diamond-cut alloy wheels look different and fresh. The rear end of Hyryder looks more in lieu of the Vitara. The only difference it s the dual-barrel LED taillights and the sleek strip embedding the Toyota lettering. The Hyryder is a long car at 4.3 mt & the tall body design is surely noticed on the road.

Speaking of the features, Toyota has equipped it with all the bells & whistles which have become a segment standard now. These include a panoramic sunroof, wireless charging, 360 camera, 6 airbags, head-up display, etc.

And now coming to the crucial driving part of the Strong Hybrid version - this comes with e-Drive automatic transmission, something we have seen on other hybrid options, the Honda City. The 1490cc petrol engine has 92PS of power and 122 Nm of torque. While these may sound less standalone, the engine gets a proper push from an electric motor that is rated at 80 PS of power and 141 Nm of torque. Together, the duo ends up offering 114 bhp of power and an ample dose of torque.

The highlight here is fuel efficiency. The Hyryder Hybrid can be driven in EV-only mode if the battery juice is enough to power the electric motor. This means you can drive the car while the petrol engine is off and hence this will ensure extremely high levels of efficiency. Our colleague saw an easy 25 kmpl on the display and the same will benefit owners as well. However, pedal to metal, the performance isn't shattering and might leave owners wanting for more. With a full load of passengers and air-con running, overtaking faster moving vehicles might need pre-calculation.

At the same time, for those who like to drive sedately, the Toyota Hyryder will reward them with an easy-going nature, keeping up with the traffic flow easily. This is also where the suspension comes into play, absorbing undulations and broken patches with ease. As a family SUV, this one does the job pretty well. Likewise, good visibility and light steering makes urban runs a piece of cake. This is good news for those looking at an all-rounder product.

While we don't have access to how the mild hybrid version drives, the same engine comes across as a decent performer in the new XL6. It is tuned for efficiency and Toyota will offer both manual and automatic with this Maruti-sourced engine. Customers will also be able to pick from an optional AWD (manual gearbox only)

Toyota had to announce prices for the Hyryder on the 16th August. However the same got delayed for reasons not known as of now. Expect prices to start from Rs 10 lakh for the base manual mild hybrid going all the way to Rs 16-17 lakh for the strong hybrid model. Stay tuned for more soon! 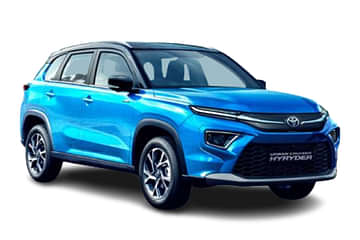