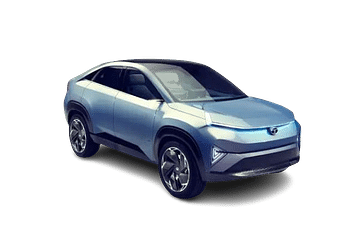 Curvv is a SUV car from Tata. Tata is expected to be launched at a price of Rs. ₹ 20.00 Lakh in Indian automobile market.

Tata Curvv is a concept electric car that the company plans to release within the next two years. In India, the car will usher in a new breed of vehicles. The Tata Curvv will be the first vehicle to represent the company's aspirations to define a new era in SUV design. The Curvv will be designed to provide supreme practicality, elegance, dynamism, and unrivaled road presence.

Tata Curvv: What do we know so far?

The Curvv will be powered by a strong battery-electric motor system, the brand has not revealed the battery capacity and other details.  The Curvv, which is based on Tata's generation 2.0 EV architecture, will reflect the brand's pillars of range, performance, safety, and sustainability.

The Curvv is built on Tata's new digital design language, which will be used to all of the company's future SUVs. The Curvv concept is a coupe-style SUV. A curved roofline and a notchback-styled boot are among the new styling's highlights. A full-width LED light bar and triangle air vents are other features of the Curvv.

A panoramic sunroof, a floating centre console arrangement, a rotary gear selector, and a centre armrest are among the characteristics of the new Curvv concept. In addition, the EV concept has a three-layer sculpted dashboard with a clean, minimalist design across the interior. The two free-standing digital displays for the infotainment system and the instrument cluster, respectively, are also included. Finally, the Curvv is equipped with a redesigned two-spoke steering wheel.

The Tata Curvv will hit the market in the next two years, bringing with it a unique, edgy, and sporty coupe body style to India. It will also be a continuation of the company's ever-evolving Electric Vehicle (EV) portfolio, which will be followed by its Internal Combustion Engine (ICE) equivalent in the future.

Have a question in your mind about Tata Curvv?