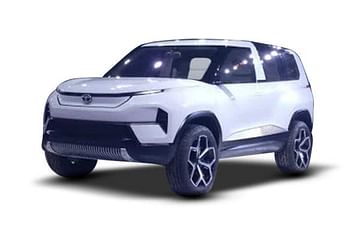 Sierra is a SUV car from Tata. Tata Sierra is expected to be launched at a price of Rs. ₹ 15.00 Lakh - ₹ 20.00 Lakh in Indian automobile market.

Last updated on 9th Jun'22: Tata has shown an electric version of its iconic SUV Sierra at the 2020 Auto Expo. Sierra is expected to return to the market as an electric vehicle, keeping its classic design concept with it.

Tata Sierra Quick Review
Tata Sierra is a cult SUV from Tata Motors that was once a very popular choice in the Indian market. Known for its special rear windowpane design, Sierra found an immediate fan following pan India. Tata Motors is now working on the new Sierra SUV, which Tata showcased as a prototype at the Indian Auto Expo 2020 in an all-electric form. Expected to be launched as an EV, Sierra is bound to make a comeback to the market whilst carrying its iconic design philosophy.

Tata Sierra Exteriors
The exterior design of the Sierra resembles the older generation Sierra SUV. The boxy design is beautifully carved with sharp lines and slight curves keeping context with Tata's Impact 2.0 design philosophy. A futuristic design from the ALFA-ARC form at the front that resembles production models like Punch, Harrier, and Safari; Sierra is bound to be a looker at first glance. The fixed twin-windowpane design is carried in the new Sierra too. The rear of the Sierra uses a large rectangular windshield which is well-integrated with a panoramic moonroof thus giving the cabin a hotel-like experience. With Tata badging and Sierra littering at back, this minimalistic design caresses the bold and big Sierra with a single wraparound LED taillight.
Tata Motors has been winning the hearts of customers with great design options and the Sierra will be no different!

Tata Sierra Interiors
Tata Sierra interiors are very minimalistic and provide a large cabin space. The showcased prototype of Sierra came with two + one seating type. While the front passengers get the individual seats, the rear seat is designed as a single unit in L-shape which is reworked like a large couch. This gives the rear seating ambiance a hotel-like environment. Although this was seen on the prototype variant, we expect the production model to be very different in terms of interior design. As with most Tata offerings, expect a roomy cabin with a larger, useable boot.

Tata Sierra Features
Tata Motors has not revealed any features of Sierra. Going by the standard fitments seen in the prototype variant, we feel that Sierra will come along with some segment-first features. What's expected is the large cabin space and use of futuristic design elements.

The Tata Sierra is set to make a comeback as an all-electric vehicle. The Tata Sierra prototype was exhibited with a stated driving range of 400 km on a single charge, based on the latest generation Ziptron EV powertrain.

The Tata Sierra is still in the works, and it's unlikely to hit the market before the end of the year. Tata is expected to release the Sierra SUV in the fourth quarter of 2022 or the first quarter of 2023.

Have a question in your mind about Tata Sierra?