Kashmir to Kanyakumari in the Tata Tiago iCNG : Live Updates 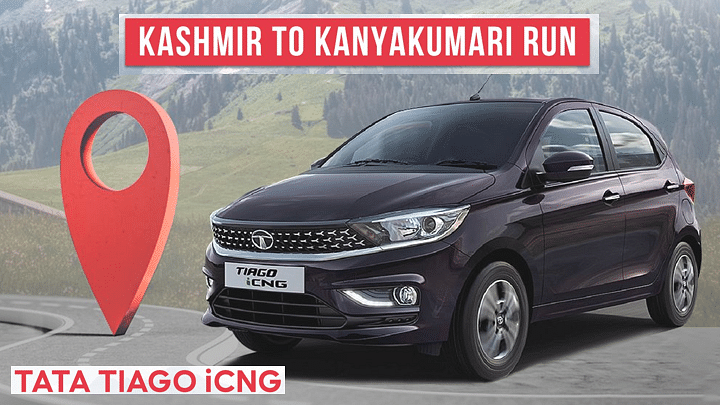 Yes, you read that right. Team 91Wheels is on its way from Kashmir to Kanyakumari in the Tata Tiago iCNG hatchback. The trip kicked off from Srinagar today morning and will continue till the Southern tip of India. This article will be updated every few hours with the latest from this CNG fuelled road trip. Before we do that, here are a few pointers that will be of interest to you

Team 3 made a sprint for the last leg as the two Tiago iCNGs headed to the destination after covering the length of India. The lead car came in with CNG mode on and thankfully we got a pump with good pressure as we left Bangalore towards Hosur. But not before getting into the infamous traffic jams. This did slow us down and post filling up at Hosur, the Tiago was allowed to stretch its legs, keeping a constant 95-100 on the speedometer.

Even after driving on CNG mode for 210km, the low gas light had not come on. This was superb considering our high cruising speed and the usage of air-con non-stop. Post Rasipuram, we got another pump but the pressure was low. The Tiago took in another 3kg here and ended up covering a total of 350km - this for a full tank plus 3kg. Impressive, eh?

The Bangalore - Kanyakumari highway is extremely scenic but sadly, we covered the last three hours in dark. As we neared Kanyakumari, we could make out windmill farms around the highway and plan to shoot these in the morning - this is for the main video that goes online on our Youtube channel.

Finally at 10:10pm, we drove into the parking lot of our sea facing hotel. The main trip meter A showed 3818km. We took less than 64 hours to cover this. If we minus the time for shooting, finding CNG pumps and swapping of teams, the two iCNGs were constantly running for about 60 hours. 3818km is something owners do in about two months but we did it in less than 3 days. Epic? Super epic! Ending this log with a view of the sea that we took in the morning.

The team hit the 3000km while passing the little town of Palasamudram in Andhra Pradesh. This has been achieved in under 51 hours - something most users take 2 months to cover. The lead car is has been running on CNG power since the BPCL pump at Ramarajupalle. The next pump for the team is before Bangalore which means petrol mode won't be used for now.

The Hyderabad - Bangalore highway is very scenic as seen in the image above. Windmills, green hills and a smooth highway - all this makes up for a great show. However, we are restraining ourselves from hitting the ton mark as this road is also notorious for Interceptors that always have speed guns ready.

The teams are very excited as the #K2KiCNG drive goes into its final leg from Bangalore onwards. Stay tuned for all the action!

This update comes after a long time and for reasons. The Nagpur to Hyderabad stretch turned out to be a nightmare as compared to the beautiful and smooth stretch that Team 3 had encountered from Gwalior to Nagpur. No roads, pot holes, massive craters, et al, this stretch had it all. However, roads improved a lot once we entered the state of Telangana. The bad roads, along with truck traffic, did slow us down a lot.

The second reason for delay has been the non-availability of CNG pumps. The team found nil pressure at the pump at Masaipet and no gas could be dispensed. Likewise, the next pump inside the town of Tupran was closed at that time of hour. Unfortunately, we had to carry on on petrol mode towards Hyderabad.

That said, the good part came in the form of excellent lights that lit up the road easily. Likewise, in the petrol mode, both the cars continued to show over 21 kmpl on the display - this with the air-con running. We are hopeful to get working CNG pumps with adequate pressure on the Hyderabad - Bangalore route!

Team 3 handed over both the cars to Team 1 that flew in from Chandigarh - remember, they did Srinagar to Rajpura yesterday? The total distance on this trip has now gone over 2000km (per car) and this has been achieved in about 35 hours. Team 3 today covered over 750km in under 11 hours - this included shoots on the way.

Unfortunately, the team could not find a suitable CNG pump for the Tiago. The only company dealing with CNG (Rawmatt) had one pump closed and the other did not have a compatible nozzle. The staff admitted that their nozzle is usually for the after marker CNG kits. Strange and sad.

This means Team 1 drive the Tiago iCNGs from Nagpur on petrol mode only. The route from last update (below, Lakhnadon) till here was great. We did waste 30 mins in Nagpur while looking around for a CNG pump. The highlight till here was the elevated corridor over the Pench Tiger Reserve (as seen above). This has been made specially to ensure no harm happens to the wildlife from highway users. Both the cars were kept between 90-95 km/h.

Team 1 will now hand over the cars at Hyderabad to team 2 - this team flies in from Gwalior to Hyderabad. Stay tuned!

This stretch continues to be a delight in terms of smooth tarmac and scenic views. Rains have been a constant companion and Bunny, who has been in the lead car since 6am, does not find a reason to complain. As told to you earlier, CNG mode was ON for 249km and post that the car has been running on petrol power. Surprisingly, the on-board display showcases economy of over 21 kmpl even at a cruising speed of 90-95 km/h with the air-con running.

This stretch is notorious for dangers on the road - in the form of cattle that seems to love tarmac as a resting place. Thankfully, the Tiago has powerful brakes and these did come handy multiple times. Bunny is also appreciating the 8 speaker audio set-up and this was used multiple times to stream his favourite tracks.

The Tiago remains a well planted car, even at triple digit speeds. Team 3 is trying to cut down the delay caused till now and hopefully till make it to Nagpur in time!

After continuously driving all night, Team 2 has increased the overall pace of the K2K run with the Tiago iCNG. The cars have been handed over to Team 3 which is currently heading towards Nagpur. Team 2 witnessed heavy rainfall after crossing Jhansi which has led to a decrement in the overall pace. However, the tyres are providing excellent grip as per Bunny. Additionally, the AC has been switched on due to misting of the glasses. Even after notorious weather, the lead car has completed a range of 249 km on a complete CNG mode.

Team 2 aims to reach Nagpur city where Team 1 will be ready to switch cars again. Leg 4 of our journey will constitute Nagpur to Hyderabad stretch. For now, beautiful open roads along with rains accompany our non-stop K2K driving expedition with the Tata Tiago iCNG.

With an overnight drive on the EPE (eastern peripheral expressway) and Agra expressway, the team has exited the city of Taj Mahal, Agra. Total distance covered now stands at over 1100km and Team 2 (who took over the car at Rajpura) is now headed to Gwalior for a switch over with Team 3.

The two Tiago iCNG cars cruised at an indicated 100 km/h on the Delhi - Agra expressway and this did help cut down on the time. And even then, the CNG range was fantastic. Infact, before entering the CNG station on the expressway, the trip meter showed over 230km and yet the car was not on petrol power. This means the Tiago iCNG gives excellent CNG mileage even at triple digit speeds.

Another highlight is the rear seat - team member Julian has been here since Srinagar and is very happy with the comfort levels. The two drivers of the Tiago hatchbacks are impressed with the easy of using the infotainment system on the move. Stay tuned as Team 3 takes over the cars just before Gwalior - the vehicles will also be filled here at a 24 hour CNG pump.

The #K2KiCNG trip is currently in its third state right now. Post J&K, we did enter Himachal Pradesh, even if for a small time. Punjab is also where we finally managed to find a CNG pump. This was between Pathankot and Jalandhar at a city called Dasuya. The With NGV1 receptacle nozzle came in handy here for a quicker re-fill.

Both the Tiago iCNGs are performing great with none of the team members feeling tired. Infact, the poor road surfaces between Jammu and Srinagar did impress them with a superb ride quality, also enabling them to overtake slower cars without any trouble.

With the CNG tank now full, the lead Tiago will aim to cover up ground fast. There are ample CNG pumps will Jhansi and hence we will also up the pace now, munching up miles are a faster speed. Team 1 will hand over the cars to Team 2 that awaits them at Rajpura. Team 2 will also update our readers on the night visibility of the Tata Tiago. Stay tuned for more!

Although the Jammu - Srinagar highway has improved a lot in the past, lot of stretches remain bad. This is evident in the picture you see above. No roads, construction, diversions and slush greeted the two Tiago iCNGs on this route. Plus the commercial traffic jam at Ramban and Banihal meant the team could only cross Udhampur by 12 noon.

The team looks forward to a quick break at Jammu for lunch, before continuing ahead into Punjab. Stay tuned!

The journey kicked from our hotel, near Dal Lake, today morning. As you can see, this beautiful city was just waking up and before the sun tore out through the horizon, the two Tiagos (lead car plus back-up / shoot car) zipped away towards the highway leading to Jammu.

Leaving out early morning has also helped the team to avoid commercial traffic. As seen above, this was the line up of trucks before the Banihal Qazigund tunnel. Before you ask, the Tiago's CNG tank was filled up in Punjab before the car reached Srinagar. It was driven in petrol mode and hence the CNG tank was full before kicking off from Srinagar. Stay tuned for more updates coming in. You can also follow the journey via #K2KiCNG on social media handles.