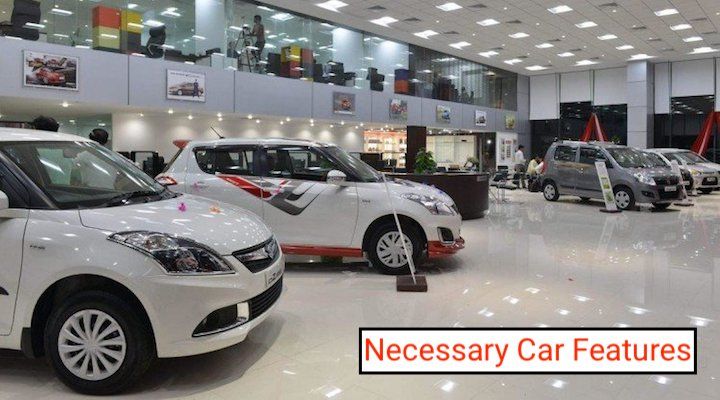 In today's era, cars have become a major part of our life and we spend a considerable amount of our time in our four-wheeled companions. To make our experience better, carmakers have equipped the cars with a number of features which makes the cabin of our cars a better place to be in. If you are out in the market to buy a car, we have prepared a list of top 10 must have features in your car which will help you make a better choice.

A nice audio system is a must-have in every car. The audio system with Bluetooth connectivity not only keeps the occupants of the vehicle entertained but also prevents the driver from getting distracted during phone calls. In addition to this, steering mounted controls further enhance the convenience levels for the driver.

Apart from making it easy for the driver to lock and unlock all the doors at once, central locking is also useful in keeping the vehicle safe. It acts as an anti-theft device as most central locking devices come with a siren which goes when forced entry is made into the vehicle. Apart from this, the vehicle can be locked and unlocked from a distance, thus aiding in better convenience.

Airbags are one of the most important safety features after ABS and EBD. Airbags reduce the injuries to the passengers in case of a crash. Fatalities in a crash are much lower for the airbag-equipped vehicles when compared to the non-airbag models. The government too has now made front airbags mandatory seeing the importance of these in saving lives during crashes.

While airbags help to reduce the impact and to minimize the injuries, features like anti-lock braking system (ABS) and electronic brake-force distribution (EBD) help prevent crashes. ABS is an active safety feature that prevents wheels from locking up during emergency braking. The system also gives the driver the ability to steer the vehicle during heavy braking. EBD on the other hand ensures that the vehicle remains stable during heavy braking and does not slide to one side due to poor traction.

Not everyone may not agree with this addition in the list of our top 10 must have features for your car but let us remind you that a rear defogger helps the driver have a much better rear visibility during monsoons and in winters. The defogger clears all the mist from the rear window class so that the driver can have a clear view of what is happening behind the car.

Also known as sonar sensors, the parking sensors warn the driver if the system senses the presence of any obstacle, human, or another vehicle in close proximity. These not only help the driver to park the vehicle properly but also prevents any kind of rear collisions while backing up the vehicle.

If you are someone who tends to drive more during the late hours of the day, or during the night, chances are very high that you will be subjected to the harsh glare from the headlights of the vehicle at the rear. Day/night IRVMS greatly reduce this glare and make the night driving a comfortable and less stressful affair.

Electrically adjustable ORVMS make it to our list of top 10 must have features in your cars as these prove to be very useful in the longer run. This feature not only lets the driver easily adjust the rear view mirrors but is also a highly required feature if multiple drivers use the same vehicle.

Be it paying the tolls, or getting the parking slip, during our drives, there arise a number of situations when we require to lower down the front windows. Front power windows make it highly convenient for the driver to operate the windows without any major fuss.

Must Read: Tips To Buy Used Super Bikes In India: Top 5 Things To Look Out For

For anyone who drives a lot of distance on the highways very often, the front armrest may just prove to be a very useful feature. It not only helps the driver rest his hand on it but also doubles up as a storage compartment where the driver can keep a number of small knick-knacks in.

What according to you is the most essential must-have feature for your car? Take your time and let us know in the comment box below.