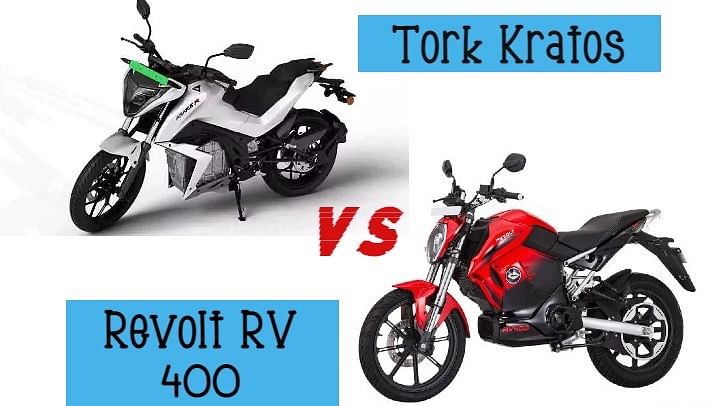 Tork Motors finally debuted the Kratos, and it locks horns directly against the Revolt RV400. Which one sounds better on paper? Check them out.

The recently launched Tork Kratos is quite an exciting motorcycle on paper. It has a fairly sized battery and provides an equally good range for an electric motorcycle. However, being an electric two-wheeler it competes in a very niche segment which includes the likes of the Revolt RV400. So, which of the two electric motorcycles is a good deal?

Below we have done a spec comparison of the above motorcycles, but before you go ahead, do join our exclusive 91Wheels Telegram and 91Wheels Whatsapp to get access to news quicker and more accurately in the Industry.

Mechanically speaking, both the Kratos and RV 400 come with swappable battery technology.  However, the Kratos gets bigger batteries at 4 kWh, which produces more peak power than the Revolt RV400. When it comes to pace, both bikes feel the same, but the former loses its advantage when it comes to range. In city mode, the RV400 can do 150 kms, but the Kratos in the same mode can do just 120 km.

Both the e-motorcycles have almost the same underpinnings. But the Kratos is built around a split trellis frame made of high strength steel tubes. The body suspends on telescopic forks upfront and a mono-shock at the rear. The Kratos rides on 17-inch sized wheels on both ends, and both ends get disc brakes.

The RV400, on the other hand, is built around a single-cradle frame, and body suspends on Upside-Down fork suspension at the front and a mono-shock suspension at the rear. Just like the Kratos, the RV 400 also gets disc brakes at both ends on its same 17-inch wheels.

Both the Kratos and RV 400 look their part naked motorcycles. However, there are some crucial differences when it comes to their dimensions. With bigger batteries, the Kratos weighs heavier and has smaller ground clearance with less seat height. The RV 400 is not only lighter but also sits taller and measures marginally longer as well.

We have taken into count the ex-showroom price of both the electric motorcycles in Pune. From the table below, it is clearly evident that the Kratos is a bit expensive than the RV 400, and it is precisely because of the bigger lithium-ion battery.

Both the Kratos and RV 400 are familiar to each other. But the Kratos comes with a racing lineage, and Tork Motors has been at the forefront of electric two-wheeler racing in India, going all the way to the Isle of Mann TT. The Revolt RV 400 is more of a domestic home-bred motorcycle that has been built to ply on a daily basis.

So which one of the two motorcycles above suits you? Let us know in the comment section. In the meantime, do join our exclusive 91Wheels Telegram and 91Wheels Whatsapp group to know more about vehicles, conduct discussions on your favourite ride, and much more! You can also subscribe to our Youtube channel for our exclusive video content on the latest from the world of cars and motorcycles. Also, connect with us on Facebook, Instagram, and Twitter for more about vehicles!