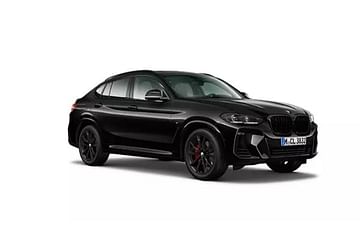 Last Updated On 7th Jun’22:  The BMW X4 is an internationally acclaimed sports SUV that is well known for its coupe roof design along with sporty driving characteristics. The BMW X4 has now been updated with new cosmetics as well as technical upgrades. The new X4 facelift gets a larger signature kidney grille that gets new LED headlamps on either side. The M Aerodynamic package also brings in sporty inserts on the front and the sides that help in enhancing the looks by a significant margin. The German carmaker is offering the X4 with both diesel as well as petrol powertrain options. The new BMW X4 is also now made in India thus helping the brand to keep the costs to a minimum.

The BMW X4 is also offered with a Black Shadow Edition that offers a completely blacked-out design for the customers who look more sporty X4. The BMW X4 facelift is offered with two powertrain options - xDrive30i and xDrive30d. The xDrive3i gets a 2.0-L turbo petrol engine that churns out 251 bhp and 350 Nm of peak torque. The xDrive30d on the other hand boasts a peak power and torque output of 261 bhp and 620 Nm respectively. Both these engines are offered with an eight-speed transmission option.

Performance of X4 is backed by a 8 Speed Automatic transmission and 4WD configuration.

View all photos and videos

Have a question in your mind about BMW X4?