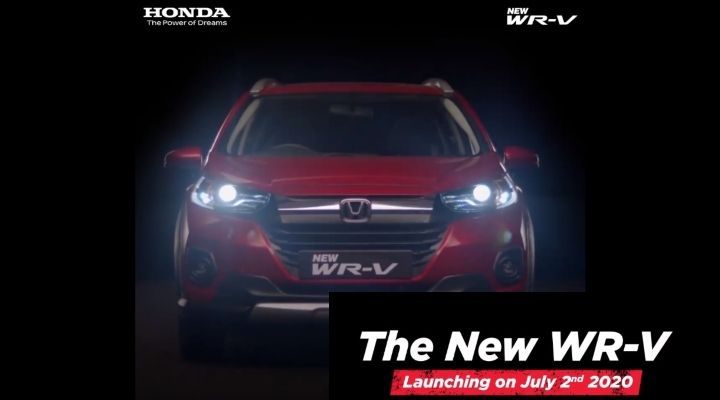 Honda Cars India have been gearing up for the Indian market and if it wasn't for the COVID-19, their much needed mid-size sedan, the all-new City and the 2020 WR-V would have been launched already. However, things are taken into consideration, the wait for the 2020 Honda WR-V is now over and it will launch on July 2 now.

Honda WR-V has always been a people's favourite crossover as it provided a decent amount of features, reliable engine and also loaded safety features. One of the highlights was that under Rs 10 lakh, ex-showroom, Delhi, a sunroof equipped WR-V was available and that was the USP for its huge sales.

The bookings for the same started in March and can be booked either via online or through dealerships across the country. You can book the all-new 2020 Honda WR-V in just Rs 21,000.

Sharing details on the design then the front and rear profile have been tweaked according to the new-age culture. You will now see projector headlights with integrated DRLs (Daytime Running Lights) and position lamps. It also sees a bold new front grille which now looks urban in design and packs in an aggressive styling.

The side profile more or less remains the same and just notice the new alloy wheels design. At the rear, a new pair of C-shaped LED taillights are visible with tweaked bumper design. Rest, the concept of WR-V remains the same as that of the previous model.

On the inside, things are the same as the identical 7.0-inch touchscreen system but with modern connectivity features like Apple CarPlay and Android Auto. You also get cruise control, one-touch electric sunroof, automatic climate controls and among others.

Safety features are upgraded according to the latest norms and now comes with dual airbags, rear parking sensors, high-speed alert system, front seat belt reminder, ABS with EBD and among others.

Under the hood, Honda has claimed that the WR-V will come in both petrol and diesel, unlike the Jazz which will only see a 1.2L petrol. The 1.5L oil burner, the same as the City will continue in the WR-V. It makes as much as 99 bhp with 200 Nm of peak torque. The engine will be mated to a 6-speed manual gearbox whereas the petrol will come with a 5-speed stick shift.