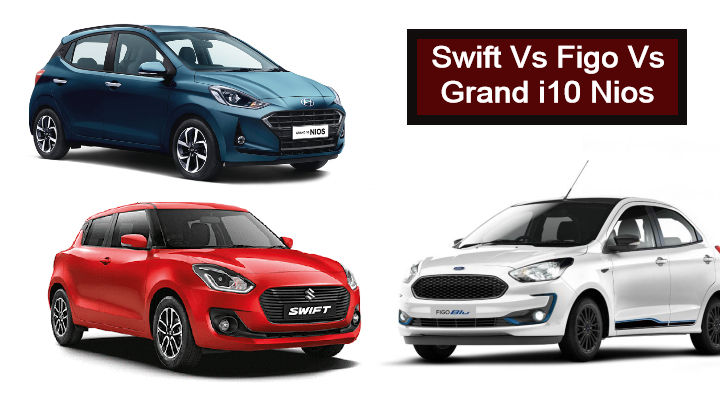 Maruti Suzuki is all geared up to launch the updated Swift face-lift. The updated model is expected to feature a new, 1.2-L Dualjet motor which also replaced the older K12B engine on the Dzire. The new Dualjet motor will not only be more powerful but is also better in terms of fuel efficiency. With this being said, let us check out the Maruti Swift Dualjet Vs Ford Figo Vs Grand i10 Nios Petrol battle to determine which one of these is the best petrol hatch.

The 2020 Maruti Swift BS6 is expected to be powered by a 1.2-L Dualjet petrol engine. The same engine is found on the updated Dzire and makes 90 PS and 113 Nm of peak torque. This engine comes mated to a 5-Speed MT and AMT gearbox. The new dualjet engine is not just more powerful but is extremely fuel-efficient as well. The company claims a maximum fuel economy of 23.26 kmpl when mated to manual gearbox while the AMT variant delivers 24.12 kmpl. This 4-cylinder engine is highly refined and smooth and the power delivery comes in at from the low rpms. The dual jet motor, as the name suggests, gets two injectors per cylinder instead of one which results in more precise control and better fuel atomisation.

The Ford Figo, on the other hand, is one of the most powerful vehicles in the segment and is powered by a 1.2-L Dragon series petrol engine that churns out 96 PS and 119 NM. The engine is mated to a 5-Speed manual gearbox but delivers 18.5 kmpl, which is significantly lower than the Swift Dualjet. This engine helps the Figo deliver great performance figures, and the car is one of the best performers in the segment on the highways.

The Grand i10 Nios is one of the latest entrants in the segment and gets three engine options. The 1.2-L naturally aspirated Kappa motor, powering the lower variants of the Grand i10 Nios churns out 83 PS and 113.7 Nm of peak torque. The engine comes mated to a 5-Speed MT and a 5-Speed AMT. Just like other engines from the brand, this engine is extremely refined and smooth with enough grunt to be driven at triple-digit speeds on the highway.

With the update, the Maruti Suzuki Swift Dualjet is expected to get all the modern bells and whistles. While the seats are supremely comfortable, the quality of the components used inside the cabin is not the best in the segment. There is enough space in the rear for three people to sit, the taller adults may not be very comfortable. The Swift will also feature the brand's latest infotainment system with Apple Carplay and Android Auto connectivity.

The Grand i10 Nios gets a modern dashboard layout and a long features list. The fit and finish levels inside the car are best in class and the seats too offer supreme comfort and great support. With features such as a rear ac vent, the Grand i10 Nios simply outshines its rivals in the department of the interior.

Check This Out: ECU Remapping Pros and Cons - Is Car Remapping Good In The Longer Run?

The Maruti Swift, with its wide stance, looks absolutely stunning and with the upcoming facelift, is expected to get a better exterior design. The Swift looks very sporty and aggressive with its curvy, low-slung design language.

The Ford Figo on the other hand gets a more conventional design language. The front looks elegant and class and in addition to this gets some aggressive designing elements such as a power bulge on the bonnet and a strong shoulder line. While the Figo may not look as good as the Swift, it still gets an attractive design language.

The new Hyundai Grand i10 Nios has a compact footprint and gets one of the best looking designs. There are sharp cuts and creases and the overall design looks bold and modern. The DRLs upfront in addition to the sleek headlamps complements the overall character of the car.

What do you think, which one of these cars is the best? Share your thoughts and opinion in the comment box below and also join our 91W Auto Enthusiasts Whatsapp Group to be a part of more such discussions.