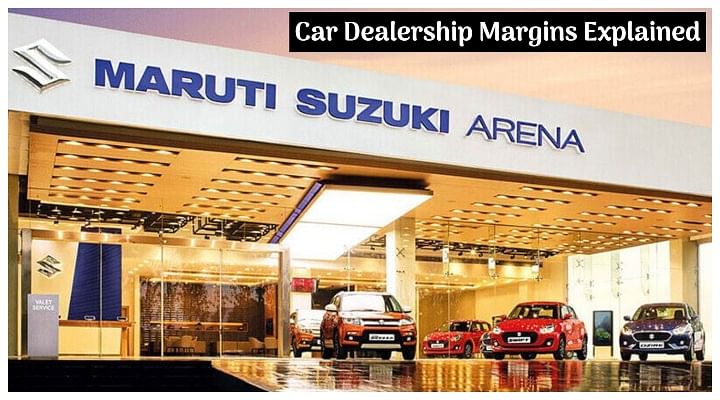 Updated on April 14, 2021 - Many of you might have wondered how much money do car dealerships make in India and what are the different ways through which they can earn money. Well, so you are at the right place as in this article, we have explained to you the Car Dealership Margins in India.

Original Article - June 10, 2020; India is one of the largest car markets in the world. Around Four Million (40 lakh) passenger cars are sold in India every year. The carmakers either manufacture their car in India or import it from abroad and then sell them here via its dealership channels. Every manufacturer wants to have a wide reach in the country to lure more and more buyers. And, to do that they need a solid dealership network. You all must have wondered how much money these dealerships make by just selling the cars. So, in this article, we will explain the Car Dealership Margins in India. Also, we will be discussing FADA's recent demand as it wants automakers to fix dealer margin in India.

The Federation of Automobile Dealers Associations (FADA) has recently announced that it wants the OEMs to fix dealer margin on vehicles to 7 per cent of the selling price. To request the same, FADA had recently written to automobile industry body SIAM (Society of Indian Automobile Manufacturers) twice to increase fixed dealer margin to 7 per cent of the selling price. According to SIAM, it has conveyed the message to all the automobile manufacturers. Also, FADA has announced that some of the automakers have taken it positively & proactively and discussions have already begun in dealer councils of automakers with dealers for margin revision.

According to a recent survey by the Federation of Automobile Dealers Associations (FADA), the average fixed dealer margin in India is much lower compared to the global figures. As per the study, most automakers in India offer less than 5 per cent of the average fixed dealer margins, basically, it ranges from 2.9 to 7.49 per cent on Ex-showroom price across all categories. In India, MG Motors and Maruti Suzuki offers the highest average dealer margins at 5.22% and 5.07% respectively. However, these figures are still far below global standards. For instance, countries like the United States offers 8-10 per cent of dealer margin, figures in China range between 9-11 per cent and it ranges around 13-14 per cent in France, Germany, Italy, Spain, Belgium, Denmark and South Africa for car dealership margins.

Here is a table that lists the Average Margins offered to Car Dealers in India by some of the Automakers in an order of maximum to the minimum:

According to FADA, an average fixed margin of 4-5% is too low considering the amount of investment the dealers have to make and also they have to bear a huge recurring expenditure. Commenting on the same, FADA President Ashish Harsharaj Kale said, "We are at such a low level globally and otherwise also in India at 4 to 5 per cent, if you look at the kind of input that a dealer puts in especially in the last four-five years. Over the time profitability has come down. These (margins) are okay five years back (but not anymore)".

Mr Kale further added, "Remember, this time it is not the question of profits, but is a question of our survival together we have to make sure that we survive through this crisis and beyond the crisis, build up sustenance to absorb any future disruptions." Commenting on FADA's initiative, Nikunj Sanghi, Managing Director, JS Four Wheels (a leading auto dealer of North India) said, "It's a very right step, and it was long overdue. Without the revision of dealer margins, it will be very difficult for dealers to survive. I personally feel that volumes per dealership will go down in the present conditions, and the kind of cost the dealers have, unless the margins are revised, they will not be able to remain financially healthy."

Two-wheeler Dealership Margins
If we talk about two-wheeler makers, they also offer somewhat similar dealer margin. The margin ranges from 3.01 to 4.57 per cent on Ex-showroom price for bikes costing under Rs. 50,000, it ranges around 3.76 to 6 per cent for bikes costing between Rs. 50,000 & Rs. 75,000 and for bikes in the range of Rs. 75,000 - Rs. 1 lakh, the dealer margin is around 3.77 to 6.68 per cent. Just like the luxury carmakers, the dealer margin is much higher for luxury motorcycle brands like Harley-Davidson and Triumph. Harley-Davidson offers a margin of around 11.43 to 14.55 per cent while Triumph offers 8.28 to 9.68 per cent dealer margin. Also, worth mentioning is that the dealer margin on commercial vehicles is the lowest ranging from just 1.28 per cent to a maximum of up to 4.62 per cent.

Other ways of Making Money for Car Dealerships:

The automobile dealerships also make money in some other ways. These ways aren't their primary mode of earning but it helps them to remain financially strong. Car and Bike dealers earn by selling third-party motor vehicle insurance policies, by collaborating with banks and other financial institutions, etc. The auto dealers also earn money by selling the company's official accessories as well as after-market fitments which the customers usually get fitted in their cars and bikes to make them look more charming or more feature-loaded. Moreover, some dealers also come up with exchange facilities and they start selling used cars and bikes too. However, these are secondary sources of earning and an entire dealership cannot be completely dependent on it.

So, this was all about Bike and Car Dealership Margins in India. What are your thoughts on this? Should automobile companies increase the dealer margin in India as soon as possible? Share your thoughts with us in the comments below.