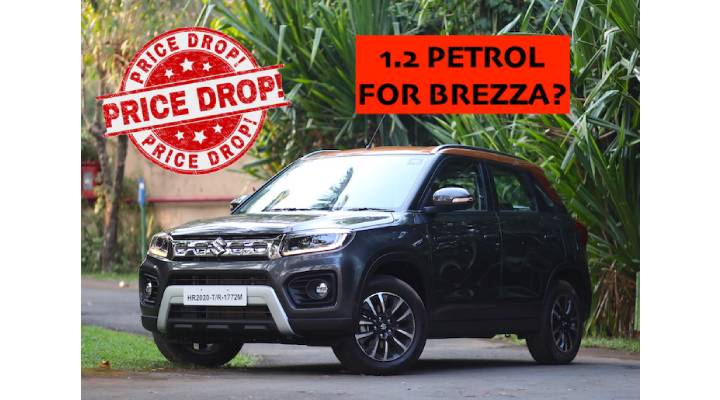 Just a few days ago Maruti launched their much anticipated Brezza compact SUV in a petrol engine at a price of Rs 7.34 lakh. Now, the bookings for the same has crossed 10,000 units but Maruti might be looking at garnering even more bookings.

Now while the Nexon and the Venue are more affordable than the new Brezza, Maruti could come up with a new set-up for their updated offering. There is every reason for us to expect that the company could make use of a new 1.2L DualJet petrol engine which is found in the Baleno. Doing so, the prices could go down by at least Rs 40,000.

With the inclusion of a smaller 1.2L DualJet Petrol engine, Maruti Brezza will also be able to enjoy the small car tax benefits thus being lighter on the consumers pocket. Also, this engine too comes with Maruti's SHVS mild-hybrid engine which further increases the fuel efficiency.

The fuel efficiency for the same will be improved with the smaller engine. Currently, the petrol manual returns 17.03 km/l while the automatic SHVS gives out 18.76 km/l. If the 1.2L comes onboard then Brezza will return more than 20 km/l which is great.

With the DualJet petrol engine, the power figures are expected to see a drop to 90 bhp as from 103 bhp currently. This particular engine will also come with the Maruti Dzire facelift which is expected to be launched later this month.

Maruti Brezza competes with the likes of Mahindra XUV300, Hyundai Venue, Tata Nexon and Ford Ecosport. If the smaller 1.2L engine is taken into consideration then the Brezza will be the second most affordable petrol SUV after the Hyundai Venue.