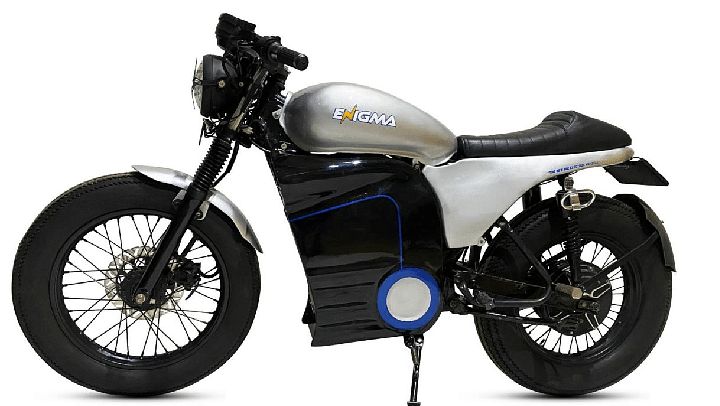 Enigma Automobiles Private Ltd recently introduced its first new electric bike. This upcoming motorcycle named Cafe Racer is a retro-styled, commuter bike with off-road capabilities. Prices of the Enigma Cafe Racer Electric bike are yet to be announced, but pre-bookings have started. The Enigma Cafe Racer bike will be launched by Diwali.

But another major important feather in the cap for the new Enigma Cafe Racer bike is this is a 100% localised product. The bike is being manufactured at their manufacturing unit in Bhopal, However, the lithium-ion battery is still sourced

Speaking about its design, Anmol Bohre, Founder & CEO of Enigma Automobiles has expressed that the styling is vintage-inspired. Not only that, the Cafe Racer aims to bridge the gap between a reliable electric bike that can be thoroughly enjoyed. This electric bike can give an IC engine motorcycle a solid run for its money with its top speed of 136 km/h.

The Enigma Cafe Racer is powered by a 72 V 52 Ah lithium-ion battery attached to a 5.6 kW motor. The power output is unknown, but its top speed and range of 140 kilometres on a single charge in city mode do give it a novel edge. Besides, there are two options to charge the bike. The standard outlet can charge 0-80% in 3 hours, and another hour to get it fully charged. The battery, on the other hand, comes with a five-year warranty with unlimited km. But the battery is good for 5000 cycles, after which you will eventually have to buy another one.

Details of the Cafe Racers chassis are not available as of yet. But our assumptions are that it sits on a double-cradle frame, to give the batteries a kind of platform. The vintage-style design is evident from the fat bob tyres on both front and rear, and the old-school saddle that ends with a classic cafe racer bump at the rear. Given that Enigma is marketing this as a commuter bike, there should be an option for the pillion riders. The design is completely made in India, with all the materials locally sourced. Except for the lithium-ion battery unit, something that Enigma is working on to make it homegrown. The Cafe Racer is available in five colours -  Log Orange, Military Green, Thunder White, RMS Red, and Earl Grey.

Enigma has been in the Indian market since 2015. Theyre an automobile manufacturing company based out of Bhopal with an annual turnover of Rs. 50-100 crores. Initially, they manufactured passenger E-Rikshaw and Loader E-Rikshaw vehicles. Now they have expanded and boast three full-fledged e-scooter in their portfolio - Amber Crink and GT450.

Ther Enigma Amber and GT 450 are based on each other. The former gets bigger brakes and three driving modes, while the latter gets some standout important practical design features.

The Crink is Enigma answer to Vespa. This model gets that iconic design with round-shaped headlights and a familiar rear apron. It gets a digital LED speedometer, BLDC 250 Motor, alloy rim with tubeless tyres, fresh abs moulded body.

So, what do you think about the new Enigma Cafe Racer Electric Bike? Would you buy this over a TVS Apacer RTR 160 4V? Let us know by joining our  91Wheels Telegram and 91Wheels Whatsapp group. Youll further know about vehicles, conduct discussions on your favourite ride, and much more! Also, you can subscribe to our Youtube channel for video content on the latest from the world of cars and motorcycles. Also, connect with us on Facebook, Instagram, and Twitter for more about vehicles!