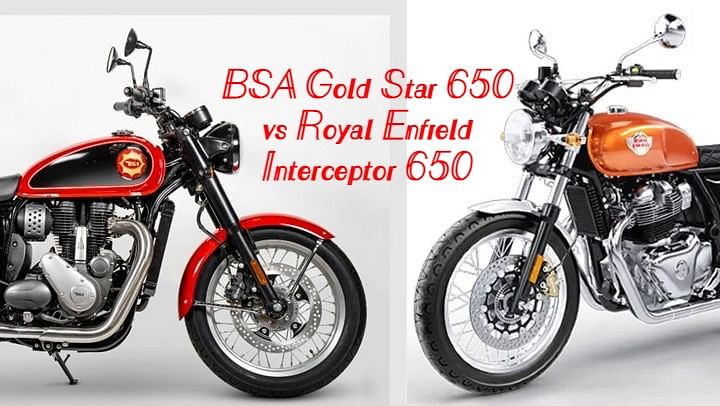 The BSA Gold Star is the quintessential British retro roadster, but the Interceptor 650 is another icon that has quite the fan base in India. How do these two 650 cc motorcycles stack up against each other?

Classic Legends owned, BSA recently unveiled their famed Gold Star 650 with modern equipment at the NEC Birmingham Motorcycle Show. This new retro-styled motorcycle will eventually launch in India, post that. It will find itself in competition with the Interceptor 650. The Royal Enfield boasts REs first twin-cylinder motorcycle and it is probably the most VFM product available in the market.

The Gold Star 650 will have its own tricks up its sleeve, but will those be enough to beat the popularity of the RE Interceptor 650? Below we have compared the specs of both the motorcycle and figure out which one sounds stronger on paper. But before we go ahead, do join our  91Wheels Telegram and 91Wheels Whatsapp group to know more about vehicles, conduct discussions on your favorite ride, and much more!

The BSA Gold Star 650 is built around a double-cradle frame using tubular steel. The body suspends on 41 mm telescopic forks up front and twin-shock absorbers in the rear, which have five-step adjustable pre-load settings. The tires are 100/90-18 at the front, and 150/70-R17 at the back, and are Pirelli Phantom Sportscomp compound. Both get 36-spoke wheels, with 320 mm disc at the front and 255 mm at the rear, and dual-channel ABS. The front disc furthermore gets Brembo two-piston floating caliper in front and a single-piston floating Brembo caliper for the rear disc.

The vintage-styled peanut-shaped fuel tank can hold 12-liters of fuel. The rear fender is fully chromed out, so is the pea-shooter exhaust. With a wheelbase of 1425 mm and a dry weight of 198 kg, the curb weight of the Gold Star 650 comes down to 213 kgs.

The Interceptor 650 on the other hand, is built around a tubular steel frame, but with a bolted truss. Suspensions duties are handled by 41 mm telescopic forks at the front and dual shock absorbers for the rear. Braking duties are again handled by 320 mm disc brakes upfront and 240 mm disc brakes for the rear wheels, alongside dual-channel ABS. Speaking of wheels, the RE Interceptor rides on the same Pirelli Phantom Sportscomp tires as standard, and 18-inch spoke wheels on both ends.

Summary: The Interceptor 650 is definitely the lighter motorcycle in this competition. However, the BSA Gold Star has a longer wheelbase than the Interceptor, and that makes it a potentially better cruiser compared to the agile Interceptor 650.

Also Read: This Modified Royal Enfield Interceptor 650 Is Definitely One Of Its Kind!

The BSA Gold Star 650 comes with an all-new single-cylinder 652 cc engine that produces 45.6 Ps and 55 Nm of torque. The engine comes mated to 5-speed manual transmission. BSA has claimed that the new engine starts building up torque from as low as 1800 rpm, which helps avoid frequent gear change, and you can cruise better.

The Interceptor 650 on the other hand, comes with a twin-cylinder engine, which again is entirely new from Royal Enfield. Power output is rated at 47.65 Ps and 52 Nm of torque, while transmission duties are handled by a 6-speed manual gearbox with a slipper clutch.

Summary: The Interceptor 650 was the first motorcycle without REs infamous vibration. It was premium of its kind, and it had quite the gentlemans pace with its acceleration. The BSA Gold Star 650 will slot in above the RE, as a premium brand, but with a torque single-cylinder engine, might struggle a bit with less power. But actual real-world testings will help settle the score, and for that, well have to wait until  BSA launches the Gold Star 650 here in India.

Both the Gold Star 650 and the Interceptor 650 might be modern retro-motorcycles, but both are still old-schooled in their own style. When it comes to features, both miss out on Bluetooth connectivity, and riding aids like traction control, or even LED headlights are absent in both motorcycles.

Common elements include the dual-analog instrument clusters, but the ones on the RE look modern compared to the Gold Stars.  Along with halogen headlamps, and LED tail lights is where the similarities end. The BSA Gold Star 650, furthermore, gets handle-mounted USB charging ports and a 12 V socket for the jacket heater. The Interceptor 650 does not get any such feature as such.

BSA has always slotted itself as a premium brand over Royal Enfield. So given this fact, the Gold Star 650 might launch in India with a premium price tag from Rs 5.00 lakh onwards. In this price range, it will compete against the likes of Kawasaki Z650RS as well.

On the other hand, the Interceptor 650 is priced between Rs. 2.81 lakhs and 3.03 lakhs. The price variation is based on the different colored Royal Enfields.

Summary: The Interceptor 650 is quite an enjoyable ride and coupled with its cheap price tag, it comes across as a real good VFM product. The BSA Gold Star 650 remains to be seen.