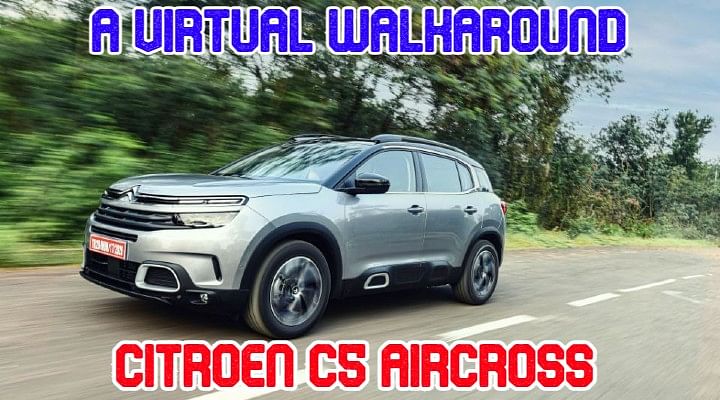 In this article, we will be showcasing you a virtual walkaround of the Citroen C5 Aircross using its pictures and tell more about its interior and exterior.

The front of the C5 Aircross sports a design that is very upright looking fascia which leads to a very butch appearance. While remaining full of character, the face of the car also comes across as modern and trendy which is due to the split headlight configuration and the usage of multiple geometrical elements. While the design is busy, it is not really that polarising when compared to other cars sold in our country.

Unlike some other SUVs in the market, the C5 Aircross carries a traditional boxy styling that is very typical of SUVs of the gone times. And we must admit that the C5 Aircross does this in style. The gloss-black roof along with the 18-inch dual-tone alloys do their part in adding to the visual appeal of the car.

The interior of the India-spec C5 Aircross is similar to the one offered on the international specced models. The black colour used on the interior trims makes the cabin feel very driver-oriented. The gauge cluster looks like it is from a segment above and gives the feeling of being inside the cockpit of an aeroplane

This is where the heart of the matter lies. The C5 Aircross will be powered a 2-litre turbocharged diesel unit that puts out stout numbers of 180 BHP and 400 Nm of torque. All of this power and torque will be channelised through an 8-speed automatic gearbox which has been developed in house

So that was our virtual walkaround of the Citroen C5 Aircross using its pictures. Share your feedback of this walkaround in the comments section below. Also, to stay updated with the latest news, join our 91Wheels Auto Enthusiast Telegram group (click via mobile to join) curated exclusively for the fans, enthusiasts and the owners. Further, subscribe to our YouTube channel for more such amazing motoring updates.