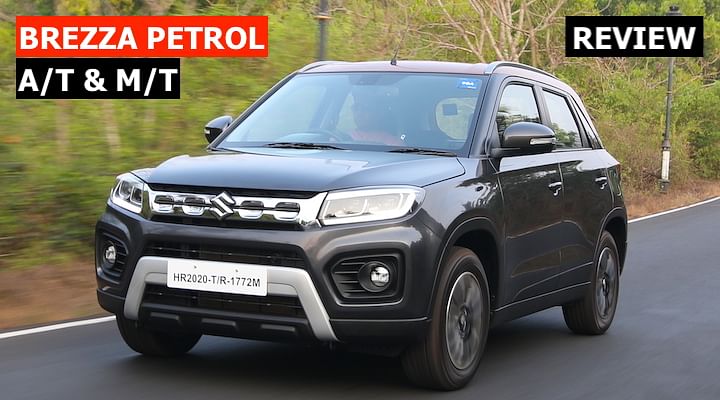 Updated on May 14, 2021 - In this article, we have shared with you our First Drive Review of the Maruti Suzuki Brezza Petrol Automatic and Manual versions. Recently, the company has hiked the prices of the Vitara Brezza and you can click HERE to check out its latest prices.

Original Article - August 1, 2020; Ever since its launch in 2016, the Maruti Suzuki Vitara Brezza has been the segment leader in the sub 4m compact SUV market. Yes, the Hyundai Venue gave it a tough fight, even overtaking it in terms of sales for a month or two but thanks to discounts and clever marketing, the Brezza regained its crown and how. However, with BS6 norms ticking in away from 1st of April, there is a BIG shift at Maruti Suzuki. No more diesel which also means the good old Brezza gets a new heart. The company took this opportunity to give it a facelift as well and off we went to Goa to spend a couple of days with what Maruti terms as #PowerToBeWicked - is the new Maruti Brezza Petrol that good? Click to watch the video below or continue to read our review here!

The updated 2020 Maruti Brezza Petrol was showcased at the Auto Expo just a few weeks back. Pricing was revealed earlier this month and though we all know how it looks from the outside and inside, a big question remained unanswered till now - how is it to drive? This isn't an entirely new motor from Maruti as we already see in other offerings like the XL6 and Ciaz but for the Brezza, its a complete change of heart. But before I go down to the driving bit, let me quickly run you through the changes made on the design front.

The overall body shell remains unaltered but the front of the new Maruti Brezza Petrol has seen a lot of changes. For starters, you have LED projectors lamps in here now with a new design for the DRLs. These also double up as indicators and looks uber cool. This is also the first time we get to see such a bling set-up on any Maruti or Suzuki model till date! The grille too is new and gels along well with the lamps, giving the front a wide stance. Maruti designers have also played around with a new bumper which means in comes a new skid plate and fog lamp housings. Overall, the effect is appealing and with new colour options on the plate, the updated Maruti Brezza Petrol does look better in flesh.

Side profile remains unchanged save for the new machine cut alloy wheels. The ones you see here are offered on the top spec ZXI+ trim only. They come with the same size tyres - 215/60 R16. In our case, the media vehice was fitted with Apollo units. At the back, there is a new LED pattern for the same tail lights and a tweaked design for the rear skid plate. Overall, the Brezza now carries a fresh appeal on the outside.

Step in and you are greeted with the same design as the outgoing version - no changes in here at all. In terms of features though, you now get an auto dimming feature for the inner review mirror and the updated Smart Play Studio functionality for the touch-screen interface. The rest of the cabin remains as it is - practical, functional and long lasting. That said, rivals have upped the game with add-ons like a sunroof, wireless charging, leather seats et al. Infact, though I appreciate the space on offer, Maruti could have (finally) introduced rear air-con vents in the 2020 Maruti Brezza Petrol. Shocked? Even I am!

And this gets us to the biggest change in the new Brezza. It's got a new heart, the same unit that Maruti uses in other models. In terms of specs, its got a 17% larger capacity, produces 15% more power but torque is down by 31%. Does this make a big issue in real-world driving? Not really! I drove both the manual and automatic versions on the drive and was literally surprised, in a good way. The manual first - its got a typical Maruti shift quality, so that means gear slot in easily and no complaints on this front. NVH levels are a huge improvement but its the way Maruti has geared it short (MT model) that leaves a smile on your face. 1st is good for just over 40 before you hit the rev limited at 6100 and 2nd takes you just over 80 km/h - this short gearing adds to the punch and also aids city driving. Also, under the diesel model, there is no turbo lag here which means immediately actions from the right foot, in slow-moving traffic, are taken care of!

The Brezza petrol manual loves picking up speeds from low engine speeds. 30 km/h in 4th ain't an issue and likewise, the 3rd can be used from as low as 15 km/h without any protest from the motor. This is a big boon for city runs and also ends up aiding the economy. Like I said before, this does not come at the cost of outright performance and this will definitely delight enthusiasts. The automatic on the other hand uses a 4-speed torque converter, the same we see on some of the other Maruti offerings. Forget the number '4', for this is a very good gearbox that takes out the best from the engine. Gear shifts are smooth (big from the low cost AGS / AMT on the Brezza diesel) and you have the option of picking from '2' or 'L' when the need arises. The automatic Brezza petrol also comes with Maruti's Smart Hybrid tech and this not only aids acceleration, thanks to the electric motor, but also saves fuel and hence gets a higher rating for the ARAI certification.

In terms of ride and handling, not much has changed here. The front end is slightly lighter now but you can still throw this compact SUV into corners and curves and exit them with a grin plastered across your face. Steering is largely light for city runs but does not give up at all as speeds rise. This is confidence aspiring and the brakes too do their job well. In terms of ride quality, you can feel an underlying firmness and that does help off the road or when driving with a full load of passengers.

With the top spec ZXI+ trim retailing at under Rs 10 lakh, I do like the overall package. The automatic will cost you about a lakh and half more (on-road) but that adds to the convenience factor while being frugal too. Yes, not all diesel fans will get converted here with the new Maruti Brezza petrol, but for most of the (prospective) owners out there in the market, the new model ticks all the right boxes. Its smoother, peppier, more affordable and looks better too. Would I recommend one? Definitely!