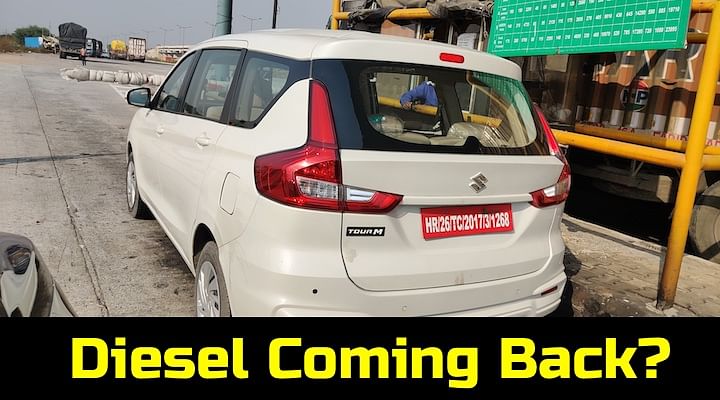 The Maruti Suzuki Ertiga is one of the highest-selling MPVs in the Indian market. The car was launched as an affordable and more practical alternative to the Toyota Innova and became an instant success soon after its launch. With the BS6 norms coming into action early this year, we saw a number of diesel vehicles taken off the shelves, and the Ertiga too was one of them as the brand did not have a BS6 compliant diesel engine after FIAT decided not to upgrade the 1.3-L MultiJet diesel engine to meet the BS6 norms. However, it seems that the brand is testing the 2020 Maruti Suzuki Ertiga BS6 diesel model which is expected to be launched in the commercial market first with the Tour M version.. With this being said, check out this exclusive video of the 2020 Maruti Suzuki Ertiga Tour.

As seen in the video, the car in question is a Maruti Ertiga which bears a Tour M badge at the rear, indicating that this car will be launched for the commercial market. The same vehicle was being tested on city roads first, followed by a highway stint later on. During the start of the video, you can clearly hear the diesel clatter. Likewise, we can see faint signs of the DDiS badge on either side of the front part of the Ertiga. While the diesel vehicle sales number in Delhi NCR may not be very impressive, buyers in other states and those who want to use their vehicles in the commercial segment are still preferring diesel-powered cars. In addition to this, the Toyota Innova diesel too is in popular demand in the market. Seeing this as an opportunity, we are expecting that the brand is now working on the BS6 compliant version of their in-house 1.5-L diesel engine. This same vehicle was reportedly spied in Feb 2020 as well which means Maruti is still doing real world tests and hence is serious about getting oil burners back!

Earlier, the brand has also said that it may reintroduce the diesel line-up in its bigger cars if the market demands for diesel vehicles remain high. The 1.5-L DDiS engine was Suzuki's first 4-cylinder diesel engine and the brand had spent hundreds of crore in its development. The 1.5-L engine churned out a maximum power output of 94 bhp and a peak torque output of 225 Nm while it came mated to a 6-speed manual gearbox. This DDiS 225 engine powered the Ertiga and the Ciaz before it was taken off the shelves and we expect the same engine to be reintroduced in cars like the Ertiga, XL6. Ciaz, Brezza, and the S-Cross.

The commercial market in the country still has a high demand for diesel powered vehicles. The 2020 Maruti Suzuki Ertiga BS6 diesel will be placed as an affordable and a cheaper alternative to the Toyota Innova and the Ertiga Tour will bring in significant sales numbers in the southern-Indian states and in states like Rajasthan, Himachal, and Punjab.

With this being said, what do you think about the 2020 Maruti Suzuki Ertiga BS6 Diesel? Do let us know in the comments box below. Join our 91Wheels Auto Enthusiasts Whatsapp Group to be a part of interesting automotive discussions. Also, Subscribe to our Youtube Channel to get the latest updates and unbiased reviews.