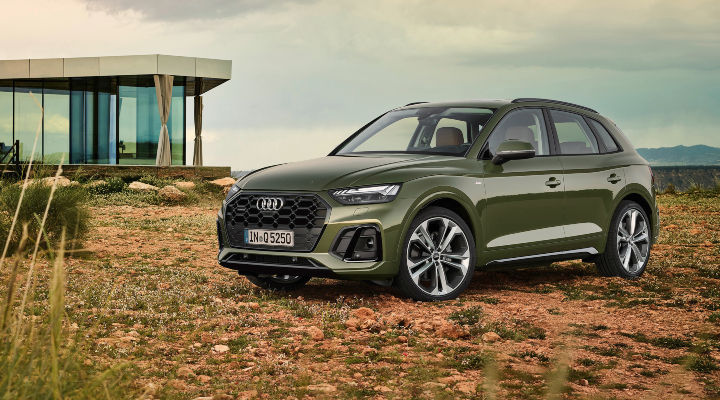 Audi has revealed the mid-life facelift of the Q5 and it is sportier than ever. Audi India has only three BS6 cars present in its portfolio - A6, A8L and Q8 whereas the RS7 will hit the showrooms in August. The 2021 Audi Q5 facelift is expected to hit the domestic market next year.

The new Q5 sports a new front end and some nip and tuck to make it fresher. The front grille is now bigger than before and the chrome surround connecting the headlights is missing. The front LED headlights a gets new LED pattern inspired by bigger Audi SUVs. The lower part of the bumper gets vertical fog lamp housing with air vents.

The side of the new Q5 is unchanged and it still sports a single honed line from the front to the very end. Talking about the rear, the new LED taillights now feature OLED technology and looks very crisp. The rear bumper has also seen some changes along with the inclusion of dual exhaust ports. Just like every other Audi, the LED lights greets you with a dancing pattern every time you lock/unlock your car. The exterior changes are much more subtle whereas the front gets most of the changes.

Moving on the inside of the 2021 Audi Q5 facelift, nothing much has changed really. The centre of the dashboard gets a free-standing 10.1-inch touchscreen system which is bigger than the 8.3-inch screen the predecessor had. The new touchscreen comes with all the connectivity features and even Alexa connect. Just like every other Audi, a beautiful and crisp virtual cockpit takes care of the driver.

Other than that, the interior carries the old layout with manual HVAC controls and tactile buttons. The three-spoke steering wheel gets all the audio and cruise control buttons. There are no changes in terms of in-cabin space and layout. The S-line trim you see here gets darker shade interiors whereas other trims will get the option of a lighter shade too.

Talking about the engines, the 2021 Audi Q5 facelift only gets a 2.0-diesel whereas petrol and V6 diesel will follow later globally. But as Audi India has waived off the diesel engines, the Q5, just like every other Audi, will also get petrol propulsors. The expected engine is a 2.0-litre 4-pot turbo petrol which may produce 265 PS and 370 Nm of torque - same as what we get in the Audi A6. The engine will be mated to a 7-speed dual-clutch box and the power will be channelled to all four wheels via Audi' Quattro system.

The launch of the new Q5 facelift will happen globally this year. However, we don't expect it to hit our shores before 2021. Once launched, the Q5 facelift will rub its shoulders against the BMW X3, Mercedes GLC, Range Rover Evoque and Volvo XC60.