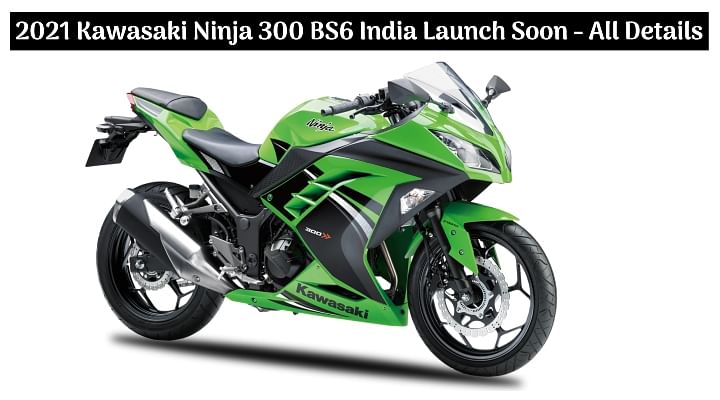 Kawasaki is the largest premium motorcycle manufacturer in the Indian market. This Japanese two-wheeler manufacturer used to have a lot of BS4-compliant motorcycles in its Indian portfolio. Kawasaki has updated some of its motorcycles to meet the new BS6 emission norms, however, there are still a lot of motorcycles that have not been updated yet. One of them is the Kawasaki Ninja 300. The Ninja 300 ABS was the most affordable Kawasaki motorcycle on sale in India and now it's coming back in the BS6 era with a bang! The company will soon launch the new 2021 Kawasaki Ninja 300 BS6 in India and here we have for you all the details about it.

If you remember, the 2017 Kawasaki Ninja 300 was launched in India at Rs. 3.64 lakhs, Ex-showroom Delhi. The 2017 Ninja 300 was obnoxiously priced in the country back then. That was mostly because it was directly imported to India via the CBU (completely built unit) route. Around two years later, in January 2019, Kawasaki launched the new Ninja 300 ABS in India at Rs. 2.99 lakhs, Ex-showroom Delhi. The 2019 Kawasaki Ninja 300 ABS got a major price cut because it was brought to India via the CKD (completely knocked down) route and was assembled in our country. Kawasaki fans, now it's time to rejoice once again as we have some really good news for you.

Also Read: Hero XTEC Trademarked in India; Will It Be an All-New 160cc ADV or the Production Version of the Xpulse 300?

According to a latest media report, Kawasaki India will launch the new BS6-compliant Ninja 300 ABS by the end of the first quarter of 2021. This means that the new Ninja 300 ABS BS6 will be launched in the country by the end of March 2021. What's interesting about the upcoming new Ninja 300 BS6 is that Kawasaki will localise it even further to bring the costs even down. According to the same media report, Kawasaki might price the new BS6-compliant Ninja 300 ABS at around Rs. 2.50 lakhs, Ex-showroom Delhi. Now, if this really happens and we wish it happens, it will be a great deal for all of us for sure! A few months ago, BMW Motorrad also launched the new BS6 G310 R and the G310 GS BS6 in India at a very aggressive price and we now expect the same from Kawasaki India too.

Now, talking about the new upcoming Kawasaki Ninja 300 BS6, so it won't get any cosmetic upgrade or feature add-ons. There will be only mechanical changes and it will get a new powerplant which will breath fresh air and will be cleaner than before. The new upcoming Ninja 300 will be powered by a BS6-compliant 296cc parallel-twin, liquid-cooled, fuel-injected engine. In the BS4 era, this motor used to churn 39 PS of power at 11,000 RPM and 27 Nm of peak torque at 10,000 RPM. The BS6 motor is expected to produce almost similar power and torque figures. The engine will come mated to a six-speed manual gearbox and it will get an assist and slipper clutch too.

For suspension duties, the new Ninja 300 BS6 will get 37 mm telescopic forks at the front and a mono-shock absorber at the rear with five-way preload adjustability. The braking duties on the motorcycle will be performed by petal disc brakes at both the end and it will get a dual-channel ABS too. The new Ninja 300 will continue to sport the same semi-digital semi-analogue instrument cluster. What are your thoughts on the new upcoming 2021 Kawasaki Ninja 300 BS6 and are you excited for its launch? Do share your opinions with us in the comments section below. You can also join our 91Wheels Auto Enthusiast Telegram group (click via mobile to join) curated exclusively for the fans, enthusiasts and the owners. Further, subscribe to our YouTube channel for more such amazing motoring updates.