CARS24 To Sell Bike, Scooters and Other Used Two-wheelers On Its Platform 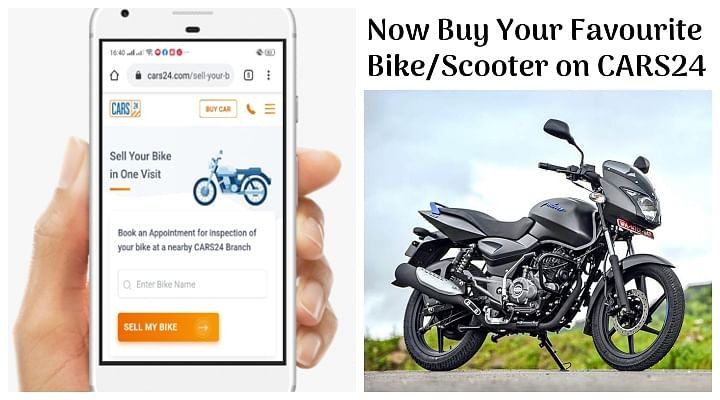 Updated on May 7, 2021 - CARS24 now sells bike, scooter and other two-wheelers too on its platform. Recently, the company has opened India's largest pre-owned two-wheeler showroom too in New Delhi.

Original Article - May 22, 2020; The coronavirus pandemic has changed our normal way of doing tasks and social distancing is now a mandatory norm. According to the latest survey by CARS24, around 15% of Indians who were using cabs as their primary mode to commute before COVID-19 would now like to switch to Two-wheelers. This means that the used two-wheeler market will grow exponentially in India. And, perceiving this as a great opportunity, India's fastest growing used car platform CARS24 has announced that the company will now also sell bike, scooter and other used two-wheelers on its platform.

CARS24 is a tech-enabled used automobile platform and the company has announced that the users can now also sell their two-wheelers including scooters, moped and bikes on its platform with the help of its channel partner network. Also, in addition to regular two-wheelers, the company promotes clean energy and is thus proactively setting up its platform to enable purchase and sale of electric vehicles (EVs) too.

Like we mentioned above, most of the users will now be switching from private vehicles to personal mobility solutions. The report further indicates that the people are likely to invest more on two-wheelers than four-wheelers in the upcoming months. Thus, with an aim to streamline the selling process of pre-owned two-wheelers as it has successfully done for cars, CARS24 will now enable two-wheeler owners to sell their vehicles at the best price without any hassle.

The company has further announced that the customers can either book an appointment for a free bike inspection at home via its official website or can visit the nearest CARS24 branch. The company intends to address all the hassles customers currently face and so the company will offer features like instant payment and free RC transfer on its platform. CARS24 also announced that it will be leveraging its current infrastructure with the help of technology innovations to offer world-class services and cater to the huge pre-owned two-wheeler market which is around 5 times bigger than the pre-owned cars market by volume.

Sharing the information, Gajendra Jangid, Co-Founder and CMO said, "Extending our services to two-wheeler owners is natural as India is the largest two-wheeler market in the world and we see a huge potential since pre-owned two-wheeler market is approximately 50% more than the new two-wheeler market. With Cars24's current infrastructure of 210+ branches pan India, we believe we have the power to change and organize the used two-wheeler industry by offering trust and transparency to our customers through technology."

He further added, "With this, we expect to establish our presence in top 15 cities with an aim of over 50+ branches within the next 6 months to help customers sell two-wheelers in an efficient and organized manner. We already have 5000+ channel partners who have shown interest in our new business model and we expect this count to increase to 15000 or more in the coming months."

Moreover, apart from this news flash of CARS24 selling bike and other two-wheelers, the company is also taking all the precautionary measures and following necessary government guidelines to ensure the safety of all its employees, partners and customers across the outlets. The company is sanitizing all its branches as per WHO guidelines, providing PPE kits to its employees, distributing masks to its customers, and following social distancing norms in its outlets across India.