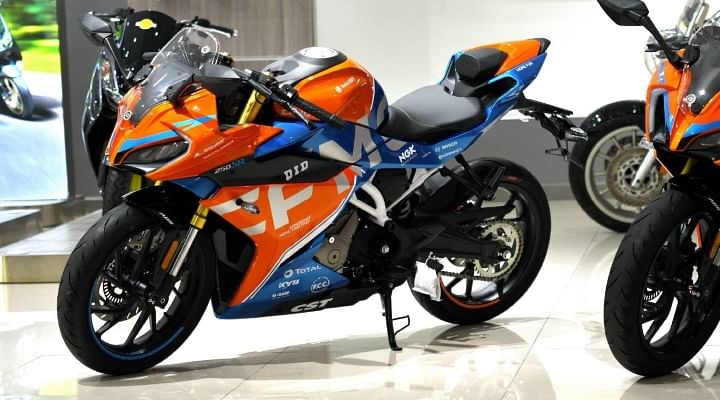 Have you checked out the CFMoto 250SR Race Edition and its features? Do you know when it will be launched? Have a look at this article to know more!

CFMoto had launched its motorcycle in the country sometime in 2019, however, after the BS6 rule was implemented, the bike maker was forced to stop the production for its motorcycle market. But not until recently, the motorcycle company revived production and revamped its motorcycle lineup to please its enthusiasts waiting to set hands on a new ride in India.

CFMoto is now re-entering the Indian motorcycle market with its BS6 compliant Motorcycles. At this juncture, to set your curiosity levels high, we thought of introducing you to CFMoto's faired motorcycle, the 250SR race edition which has been spotted in a new race livery in China.

The CFMoto 250SR race edition was spotted in china with an adorning and sporty looking orange and blue paint scheme. The motorcycle has a new look to it, which is quite different from the blue coloured motorcycle- the race edition revealed in March 2021. The motorcycle looks appealing with its unique paint scheme and design elements. If this motorcycle is bound to be launched in India, then the head-on rival to its charm and power would be the KTM RC 200.

The all-new 250SR race edition from CFMoto has a bold looking stance with a twin-pod LED headlamp setup in the front that willingly has the ability to grab the attention of people and create a road presence. The fairing looks bulky yet has sharp edges and creases along with angled lines that add to its sporty look. The fuel tank looks extremely muscular and the rest of the body has a unique flow with the tail section. However, despite the aggressive design elements, the CFMoto 250SR stands a bit offbeat when compared to the styling of the KTM RC200.

The 250SR has a tubular steel frame on which is mounted a 249.2cc, liquid-cooled, single-cylinder engine that churns out 27.5bhp of maximum power at 9,750rpm and 22Nm of peak torque figures at 7,500rpm. The motor is mated to a six-speed gearbox. The 250SR motorcycle gets KYB sourced units which include a 37mm upside-down fork in the front and a rear mono-shock suspension setup. The vehicle gets a 292mm single disc brake at the front as well as 220mm single disc brakes at the rear. This motorcycle also gets a slipper clutch.

The KTM RC200 on the other hand has a 199.5cc, liquid-cooled engine that churns out power and torque at 25.4bhp and 19.5Nm. Moreover, its six-speed gearbox also lacks a slipper clutch, unlike the 250SR. When compared to the KTM RC200, the power figures seem higher on the CFMoto 250SR and better ride quality can be expected from the CFMoto 250SR even though both these motorcycles have upside front forks and a mono-shock rear suspension.

The CFMoto 250SR is expected to be priced somewhere around Rs.2 lakh (ex-showroom, Delhi) and could be launched sometime around August 2021. However, CFMoto has not yet given any hints regarding the launch of the Orange and blue coloured 250SR motorcycle in India. The KTM RC 200 on the other hand is priced at Rs 2.09 lakh (ex-showroom, Delhi) in India, so this could be a close competitor for the CFMoto 250SR.

Would you be interested in buying this motorcycle? What do you think about the CFMoto 250SR Race edition? Please tell us your thoughts in the comment section below. Also, join our 91Wheels Telegram and 91Wheels Whatsapp group to know more about vehicles, conduct discussions on your favourite ride and much more! 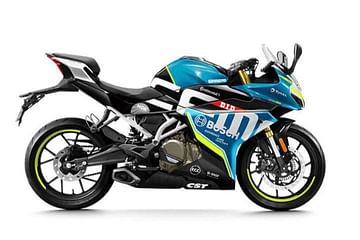 250SR is a Sports bike from CF Moto. CF Moto is expected to be launched at a price of Rs. ₹ 2.00 Lakh in Indian automobile market.