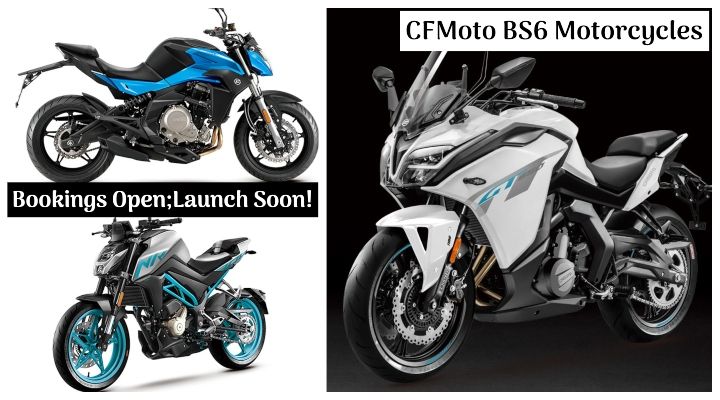 CFMoto entered the Indian market in July 2019 with a bang. The company launched not just one or two but four all-new motorcycles at a single launch event. Initially, these motorcycles created a lot of buzz in the market. That's because they undercut the price of all its rivals and that too by a huge margin. But then, the on-going coronavirus pandemic started and the supply chains were disrupted. However, CFMoto is now planning to bounce back and launch BS6-compliant motorcycles in the country. The new CFMoto BS6 Motorcycles will be launched in India before the festive season of this year and now the bookings are also open.

If you don't remember, let me tell you that CFMoto is a Chinese Motorcycle Manufacturer. It forayed into the Indian market in July 2019 with four new motorcycles. The company established its first dealership in Thane (Maharashtra) and the deliveries of the motorcycles commenced from November 2019. Later, Karnataka's capital city Bengaluru also got a CFMoto dealership. The company was planning to introduce as many as 50 dealerships across the country by the end of 2021. But, as of now, we don't have any official update on this.

CFMoto's BS4 portfolio included four motorcycles: CFMoto 300NK, 650NK, 650MT and 650GT. While the 300NK and the 650NK are naked street-fighters, the 650MT and the 650GT are adventure-tourer and sports-tourer respectively. As per recent reports, CFMoto will update all these motorcycles to meet the new stringent BS6 emission norms. Apart from the BS6 update, we do not expect these motorcycles to get any cosmetic upgrade or feature add-ons. However, there will be a bump in pricing for sure.

The CFMoto 300NK is currently the most affordable bike in the company's portfolio. It is powered by a 292.4cc, single-cylinder, liquid-cooled engine. This motor produces 33.9 PS of power at 8800 RPM and 20.5 Nm of peak torque at 7200 RPM. The engine comes coupled to a 6-speed manual gearbox and it weighs just 151 kilograms. CFMoto's 650NK, 650MT and 650GT are all powered by the same 649.3cc, twin-cylinder, liquid-cooled engine. However, all are tuned differently to serve their purpose well.

The new BS6-compliant CFMoto Motorcycles will be launched in India post-September, i.e. before the festive season of 2020. Upon launch, the BS4 CFMoto 300NK was priced at Rs. 2.99 lakhs, 650NK at Rs. 3.99 lakhs, 650MT at Rs. 4.99 lakhs and the 650GT was priced at Rs. 5.49 lakhs. All prices stick to Ex-showroom Pan-India. The BS6-compliant CFMoto motorcycles will be significantly pricier compared to their BS4 counterparts. The bookings for these BS6-compliant models are already open and one can also test ride these motorcycles at CFMoto's dealerships.

What are your thoughts on the upcoming BS6-compliant CFMoto Motorcycles? Tell us in the comments below. You can also join our 91Wheels Two-wheelers group (click via mobile to join) curated exclusively for the fans, enthusiasts and the owners.