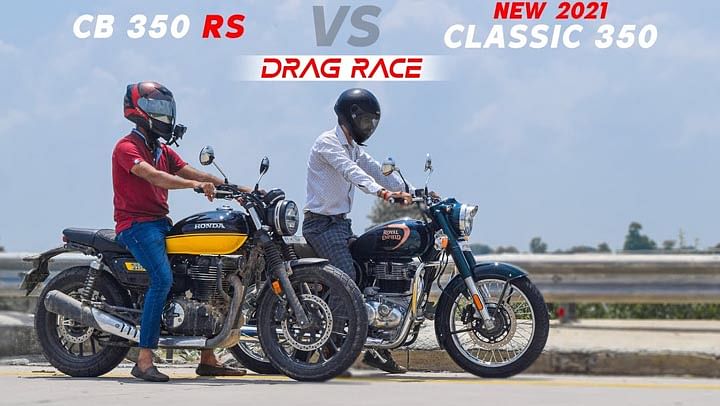 After such gloomy times, the Indian auto industry is on the verge of launching and revamping its models. The two-wheeler segment now has fierce competition in every segment. One such example is that of the new generation Royal Enfield Classic 350 and Hness CB350 RS.

Drag racing is certainly one of the most proven ways to find out which of the two or more vehicles is the one thats quicker, at least in a straight line. A drag race was conducted to check the power and torque delivery of both the motorcycles to see whether the new-gen Royal Enfield Classic 350 will be able to rev hard enough to take a lead from the CB 350 RS or not but failed to do so.

This segment of motorcycles can not be judged good or bad depending on the results of this drag race, as they are judged based on ride quality, handling, mileage, and comfort. These bikes are purchased for fun,  conquering roads by travelling distances, enjoying and taking the feel of riding a retro cruiser.

Lets take a look at the first attempt, where it is noticed that the Honda Hness CB 350 RS is quicker and could overtake the Royal Enfield Classic 350 in not more than five seconds. The rider on Classic tried to rev hard with full-throttle trying to fill the gap in between the motorcycles but failed to do so which was shocking for both the riders.

Also Read: Simple Energy One Electric Scooter Launched in India - Check Out The Price, Specs and Other Details

After the first attempt, the shocked riders decided to conduct one more drag race to clarify their doubts but the same happened in the second one as well. The all-new Classic 350 was able to touch 120 kmph in the speedometer but was unable to take a lead or even overtake the other rider for once in both attempts.

Both are retro cruisers designed and structured not only for cities but to travel distances. Royal Enfield with the change in tech and performance, has grabbed its place in the market. On the other hand, Hondas latest offering, the Honda Hness CB350 RS comes equipped with a powerful and refined engine to grab the top spot.

Royal Enfield has updated its most cherished motorcycle in the market almost after a decade and brought the new Classic 350 with refined engine and performance. On comparing it with the Honda H'ness CB 350 RS, we realized that the 2021 Royal Enfield Classic 350 and Honda Hness CB 350 RS carry the same 350cc single-cylinder engine but differ in power and torque delivery.

So, this was our post on a video of a drag race between the new 2021 Royal Enfield Classic 350 vs Honda H'Ness CB350. Now, between these two retro motorcycles, which one will be your personal pick? Do feel free to share your thoughts with all of us in the comments below. You can also join our 91Wheels Auto Enthusiast Telegram group (click via mobile to join) curated exclusively for the fans, enthusiasts and owners. Further, subscribe to our YouTube channel for more amazing motoring updates.