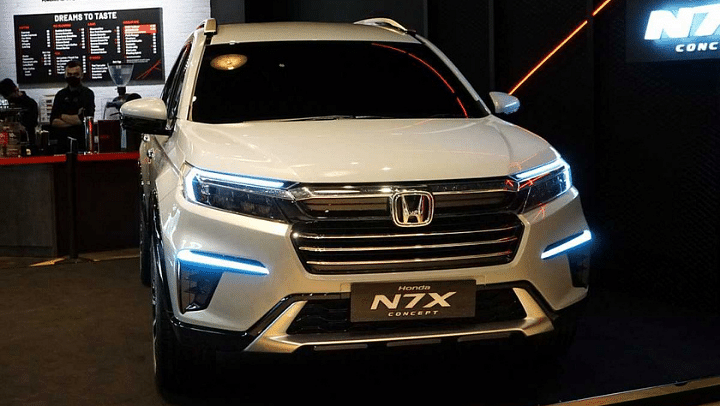 The Japanese automaker giant, Honda is ready to introduce N7X, its all-new seven-seater SUV, in Indonesia on September 21. The new model can be termed as a generation upgrade from the BR-V. So far, Honda seems to have enjoyed a lot of interest among the car buyers for its N7X seven-seater SUV. The new model is expected to be available in multiple variants and, in Indonesia, will compete against the likes of Toyota Avanza, Daihatsu Xenia, and Suzuki XL7.

It claims to offer the best structure and segment-first design language in the SUV category along with enough power. According to the reports circulated, Honda N7X will be powered by a 1.5-litre four-cylinder naturally-aspirated petrol engine that churns out 121 bhp of maximum power and 145 Nm of peak torque. The motor will come mated to a six-speed manual as standard and a CVT as optional.

The new seven-seater SUV, Honda N7X will also feature a hybrid powertrain which would make the SUV a bit more fuel-efficient compared to the other models. Reports from Indonesia also say that the SUV will be available in four trims - S, E, Prestige, and Prestige HS. The entry-level model will not be available with automatic transmission.

Even the area of the glasshouse of the Honda N7X SUV is much larger. It features wheel arches with black plastic claddings and split LED tail-lamps. The interiors of the new SUV might look similar to the City sedan. So, what are your thoughts on the Honda N7X SUV? Do tell us in the comment sections below. Also, make sure you are a member of our 91Wheels Whatsapp group where we bring you all the latest updates related to the Indian Automotive Industry.