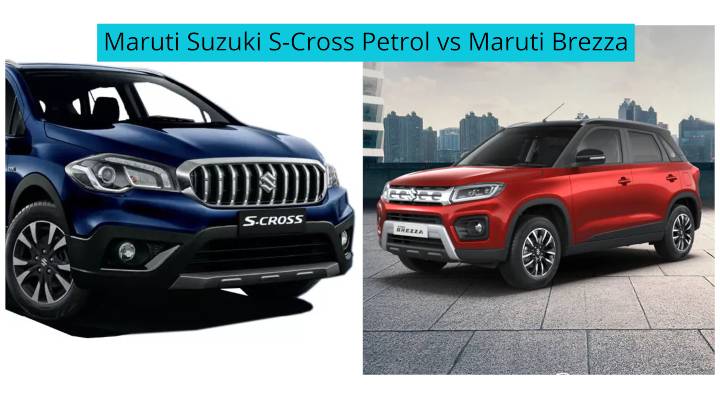 Amidst this lockdown, several upcoming cars which were about to see their launch are postponed. And one such car we are waiting for is the S-Cross petrol. Well, it will surely use the in-house 1.5L petrol engine with the SHVS technology and a 5-speed manual gearbox like the Brezza. What we are excited about is the comparison of Maruti S-Cross Petrol vs Maruti Brezza.

This comparison of Maruti S-Cross Petrol vs Maruti Brezza will be clearly based on the specs, prices and features list. Also, we are covering the Maruti S-Cross Zeta as this is close to the price range of Maruti Suzuki Brezza ZXi+ Dual Tone model.

Other than the mechanical changes and the prices, the dimensions and features of the S-Cross will stick to that of the diesel version. Comparing both these cars, the S-Cross is longer and gets a larger wheelbase at 4300 mm and 2600 mm respectively. Maruti Brezza is taller at 1640 mm and is wider than S-Cross by 5 mm. Maruti S-Cross gets a larger boot space sticking at 353 litres compared to Brezza which gets a smaller 328 litres. The fuel tank capacity and the tyre size of both cars are the same.

It is no surprise that both cars get the same 1.5-litre petrol engine. It is unlikely that the upcoming S-Cross will get an automatic four-speed torque converter unit. So Maruti might bring in the mild-hybrid technology to the manual version only. And if that's happening then it will be quick to see the same in the Brezza too.

This 1.5L motor churns out 103 bhp on tap and generates a maximum torque of 138 Nm. The engine is mated to a 5-speed manual transmission and the ARAI certified for the manual Brezza sticks at 17.03 km/l. With the SHVS technology in manual variants too, the mileage will be increased automatically.

Maruti S-Cross is a premium option than the Vitara Brezza and the Zeta version of it has some of the basic options which the compact SUV doesn't receive. Like for better braking, S-Cross gets disc brakes at both front and rear while the Brezza only gets it in the front. The boot of the S-Cross can be opened with the key and gets adjustable cluster brightness which the Brezza doesn't.

Since this is not top-spec Alpha Variant of the S-Cross, it sure misses out on certain features which the Brezza gets. Like the automatic headlights, LED fog lights and more. Both the cars get a touchscreen infotainment display with connectivity features like Apple CarPlay and Android Auto. Maruti Brezza also gets cooled glove box on the inside and a leather-wrapped steering wheel. However, even with such features, the cabin of the Brezza does not feel as premium as found in the S-Cross. Cruise control and Automatic Climate Control are some of the few features found common in both cars.

The diesel S-Cross starts at Rs 8.81 lakh and fetches till Rs 11.44 lakh. With the discontinuation of the diesel engine, the prices may see a significant decrease of up to Rs 50,000. And the petrol engine is expected to come with SHVS mild-hybrid technology. So by that only, we took the Zeta version which is priced at Rs 10.44 lakh for the diesel so the petrol one will be lowered by at least Rs 44k.

Verdict
If you are someone who wants to own an SUV and has been longing in for a long time then you should pick the Brezza. And if you want a car that is solid, gets premium cabin and are okay with missing out on some features, then S-Cross is the one. Also, the S-Cross looks handsome in looks when compared with the Brezza (Hey, it is our opinion now, haha)!