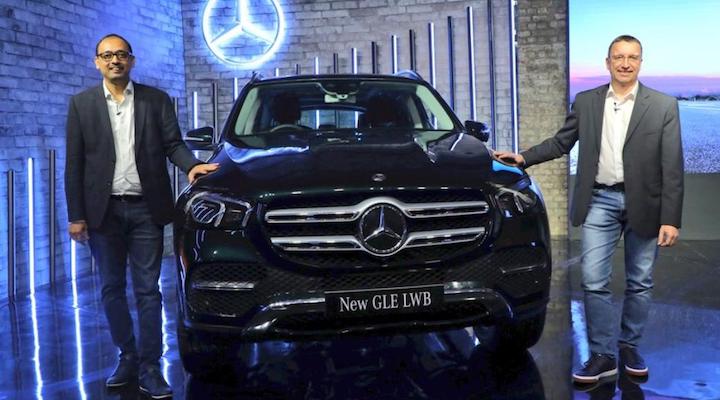 Mercedes-Benz GLE LWB New Top-End Petrol And Diesel Variants were recently launched by the carmaker in the country. The updated line-up of the brand's best-selling SUV, the Mercedes-Benz GLE-Class, now gets two new top-end variants - the 450 4MATIC and 400 d 4MATIC. Additionally, the company also introduced the EQ Boost technology for the first time in an SUV in India. This technology is said to add an additional power and torque figures by 22 hp and 250 Nm respectively.

With this update, the GLE now gets two new top-end variants. Talking about the GLE 450 4MATIC LWB, the vehicle now gets a 3.0-L, in-line 6-cylinder, 367 hp, turbo petrol engine which churns out a maximum torque of 500 Nm. An additional 22 hp and 250 Nm of the power output is also available via the 48V mild-hybrid tech, known as the EQ Boost. This model gets all-wheel drive as standard and the engine comes mated to a 9G-TRONIC transmission. The claimed 0-100 kmph timings for this engine stand at 5.7 secs.

The second variant, named as the GLE 400 d 4MATIC LWB gets a 3.0-L in-line 6-cylinder, turbo diesel engine, which produces 330 hp and 700 Nm of peak torque. Just like the 450 4MATIC, this variant also gets an all wheel drive system and a 9G_TRONIC gearbox. The brand claims a 0-100 kmph timing of 5.7 secs for this variant. It is worth noting the fact that both these engines are BS6 complaint.

At the same time, Mercedes-Benz has equipped the cars with all the safety features such as 7 Airbags, Active Brake Assist, Blind Spot Assist, and many others making the LWB GLE one of the safest SUVs in the country.

Mercedes-Benz GLE LWB New Top-End Petrol And Diesel Variants launched by the brand get a comfortable, premium and a feature-rich cabin. In addition to many segment-first features, the LWB GLE also gets AIRMATIC SUSPENSION, Multibeam LWD headlamps, widescreen cockpit, Hard-disc navigation and much more. In terms of pricing, the GLE 450 4 MATIC LWB gets a price tag of INR 88.80 lakhs while the GLE 400d 4MATIC LWB is priced at INR 89.90 lakhs (all prices, ex-showroom, India, except Kerala).

For more such news and latest updates about Mercedes-Benz products, join our WhatsApp Group. (Click link via mobile to join)