MG Gloster Price Hiked By Up To 1 Lakh Rupees - Check Out The New Price List Here! 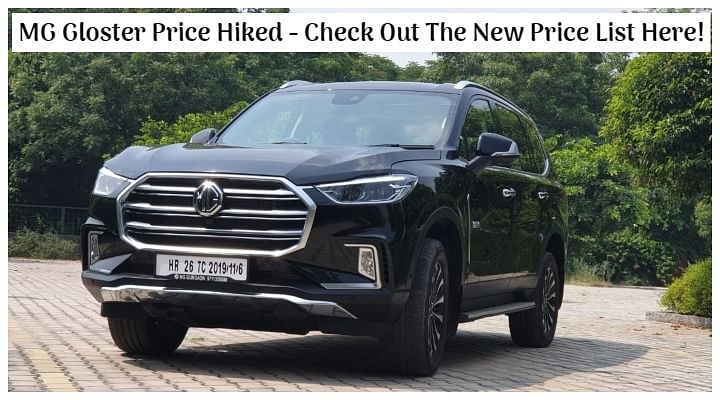 MG Motor India has recently launched its flagship SUV in the country - MG Gloster. The Gloster is a full-size SUV from Morris Garages in India. It rivals against the established rivals which include the Toyota Fortuner, Mahindra Alturas G4, Ford Endeavour, etc. MG launched the Gloster just last month at an introductory starting price of Rs. 28.98 lakhs, Ex-showroom Delhi. Now, the introductory prices have come to an end and MG has hiked the price of the Gloster by up to 1 lakh rupees. Also, the MG Gloster is already sold out for 2020 as it has garnered over 2000 bookings within a month of its launch. Let's have a look at its new price list:

Also Read: This Is How The New Royal Enfield Meteor 350 Looks In Flesh - Have A Look!

As already mentioned before, the Gloster is a very feature-loaded and tech-laden SUV. It gets a large 12.3-inch touchscreen infotainment system with Android Auto and Apple CarPlay connectivity. It also gets MG's i-Smart 2.0 connectivity with over 70 connected car features. Its top of the line Savvy variant also gets ADAS (Advanced Driver Assistance Systems) and level-1 autonomous driving capabilities with features like automatic park assist, adaptive cruise control, etc. What are your thoughts on the MG Gloster? Do share with us in the comments below. You can also join our 91Wheels Auto Enthusiast group (click via mobile to join) curated exclusively for the fans, enthusiasts and the owners. Further, subscribe to our YouTube channel for more such amazing motoring updates.