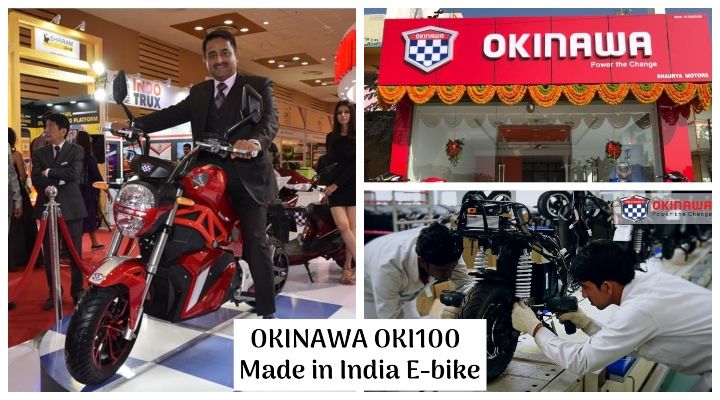 Okinawa Scooters is one of the leading electric two-wheeler manufacturers in the country. Being a pioneer in the EV space, the company is constantly striving to make its products a preferred alternative to the regular petrol-powered two-wheelers. The company has a vision for clean & green India with its strong brand aim to #PowertheChange. Okinawa currently sells a lot of electric scooters but the company will soon venture into the motorcycle space too. Okinawa will soon launch its first 100 per cent Made in India electric bike and it will be the Okinawa Oki100.

Also Read: This Is How Upcoming Skoda Karoq Looks In Real; Launch On May 26

The prototype of the Okinawa Oki100 was first showcased at the 2018 Auto Expo and the Expo visitors praised the E-bike concordantly for its technical brilliance and aesthetics. Okinawa has today announced that with a focus on Make in India initiative, its first electric bike Oki100 will be a 100 per cent localized product. The brand has been promoting PM Modi’s vision of ‘Make in India’ in the country's electric vehicle segment. And in line with the PM Modi's vision, the Indian automaker has shared that except for the battery cells, all the other components of the upcoming Okinawa Oki100 will be manufactured in India. Here is a video of the Maxi E-scooter that was showcased at the Expo.

Commenting on the same, Mr. Jeetender Sharma - MD, Okinawa said, "We welcome PM Modi’s vision of ‘vocal for local’. To accelerate the same Okinawa has announced a 100 per cent ‘Make in India’ electric bike. Currently, Okinawa offers maximum localization of electric vehicles, which is 88%. With our upcoming electric bike, we are taking the localization level up to a 100 %. All the components of electric motorcycle will be manufactured and sourced from local suppliers. We expect this to boost local suppliers’ domain and inspire all the EV startups to go ‘Vocal for local."

If we talk about the Okinawa Oki100, this electric motorcycle made its public debut at the 2018 Auto Expo and it gathered a lot of eyeballs. The electric motorcycle has compact dimensions so people will call it a monkey bike but it features a muscular stance with its bulbous fuel tank, exposed red trellis frame and bulky front-end. It also gets a fully digital instrument cluster and all LED lighting set-up with a round LED headlamp that makes it resemble a lot like the Ducati Monster.

Okinawa says that the company is planning to launch a wide array of 100 per cent localized electric two-wheelers in India and the Oki100 electric bike will be the first product in this line. To accomplish the same, the brand is intending to widen its local supplier base in India. If we talk about the launch timeline of this electric motorcycle, the Okinawa Oki100 is expected to hit the Indian showrooms by the end of 2020.