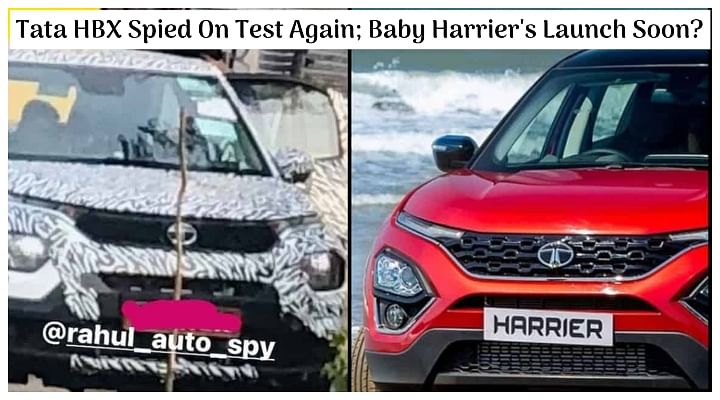 Tata Motors had a great 2020! The Bombay-based Indian car manufacturer kick-started this year with a bang. Earlier this year, the company launched four new cars together in the Indian market in January 2020. They were the all-new Altroz and the BS6-compliant iterations of the Tiago, Tigor and the Nexon. Then came the Auto Expo 2020 where the carmaker launched the all-new Harrier BS6 and also a showcased a slew of other cars and one of them was Tata's upcoming micro SUV. Hitherto, the upcoming Tata HBX micros SUV has been spied on test in India several times but this time it has been spied in its production-spec avatar. Here are all the details about it.

Just a few weeks ago, the upcoming Tata HBX micro SUV was spied on test near Pune in Maharastra and that test mule also looked like the production-spec model. However, that test mule was almost completely camouflaged. But, this time, the micro SUV has shed a little camouflage and its bold front fascia can be completely seen. So, at the front, one can see that it gets Tata's humanity line front grille. The grille resembles the one we get to see on the Nexon Facelift. Also, we can see the headlamp, DRLs and bumper of the car.

Also Read: Is This The Upcoming Royal Enfield Interceptor 350 BS6?

The Tata HBX looks very funky and as the Indian car buyers love SUVs, they will love this pseudo micro SUV too. At the front, the upcoming HBX gets a bold grille which comes in glossy black finish. Then, we have the sharp and slim daytime-running LEDs positioned on the top and the actual headlamps, which seem to be LED units are positioned below, just like the Harrier. In fact, it resembles the Harrier to a certain extent and looks like a mini Tata Harrier. Moving to the side profile, this spied test mule was wearing steel rims. But, we have earlier seen its alloys in the spy shots and the HBX will get stylish machined-cut dual-tone alloy wheels.

The rear of this micro SUV also looks quite imposing. At the rear, it will get a slight sloping stance and there will be a rear wiper too. The HBX will get body-cladding all around and skid plates both at the front as well as at the rear to enhance its rugged appeal. In fact, if you remember, at the Auto Expo, the company showcased the HBX loaded with chunky off-road bits which included off-road tyres, bash plates on all sides, roof rack with spare tyre, etc. The upcoming Tata HBX will be initially powered only by a BS6-compliant 1.2-litre naturally-aspirated engine. This is the same motor that also does its duty in the Tiago, Tigor and the Altroz. This motor will churn out around 86 PS of power at 6000 RPM and 113 Nm at 3300 RPM. The HBX will come mated to a five-speed manual gearbox and an AMT.

Also Read: Wanna Know What Are The Components Of A Drum Brake System? Here Are All The Details

According to some media reports, the HBX might also get a 1.2-litre turbo-petrol engine at a later point of time. Now, finally talking about the launch timeline, so the new Tata HBX is expected to be launched in India in the first half of 2021. The upcoming new Tata HBX will sit below the Nexon sub-compact SUV in the company's India line-up. Upon launch, it will lock horns against the Mahindra KUV100 and the Maruti Suzuki Ignis. What are your thoughts on the upcoming Tata HBX? Feel free to share your opinions with us in the comments section below. You can also join our 91Wheels Auto Enthusiast Telegram group (click via mobile to join) curated exclusively for the fans, enthusiasts and the owners. Further, subscribe to our YouTube channel for more such amazing motoring updates.