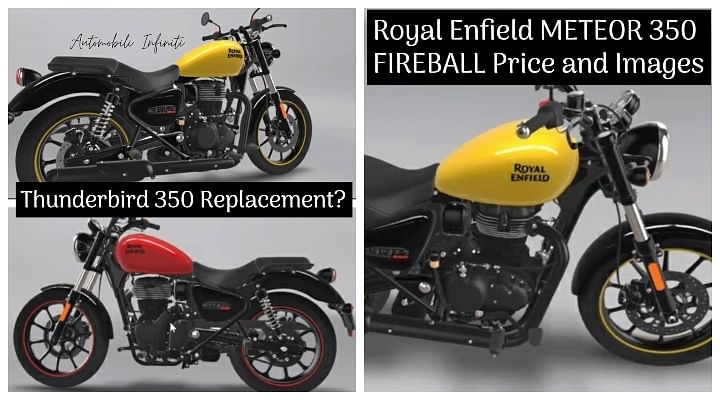 The upcoming Royal Enfield Meteor 350 Fireball has leaked online and the images seem to be the screenshots of the companys official configurator section on the website that might go LIVE as soon as the bike is launched in the market. Starting off with its looks, the upcoming Meteor 350 Fireball sports a retro-appeal with a round headlight and wrapped-around LED DRLs. It also gets a high-raised handlebar and forward-mounted foot-rest to give it a proper cruiser motorcycle-like feel.

The motorcycle also gets funky and eye-catchy colour shades like the previously available Thunderbird 350X series. The Thunderbird 350 series has not been made BS6-compliant yet and it is reported that this upcoming Meteor 350 will replace the Thunderbird series in the brand's portfolio. The leaked images show that the Meteor 350 Fireball will get Red and Yellow colour body shades and it will also get a stepped-seat with round taillamp to further enhance its look.

The Royal Enfield Meteor 350 Fireball will be based on the two-wheeler manufacturer's new J1D platform and it looks that Royal Enfield has taken design inspiration and borrowed some styling elements from the Harley-Davidson Street 750. Talking about the engine specs, it is likely to be powered by the 350cc engine that also powers the Classic 350 BS6. It might get a 346cc, single-cylinder, air-cooled, fuel-injected engine that develops 20.07 PS of maximum power at 5250 RPM and 28Nm of peak torque at 4000 RPM, mated to a five-speed manual gearbox.

The Meteor 350 Fireball will feature new stylish-looking ten-spoke alloy wheels with tubeless tyres. The suspension duties of the motorcycle will be handled by a telescopic fork at the front and twin spring-loaded shock-absorbers at the rear. The bike will get disc brakes at both the ends and it will also get dual-channel ABS (anti-lock braking system) as standard for additional safety. Royal Enfield will also add a new twin-pod cluster for instrumentation.

The Royal Enfield Meteor 350 Fireball will be launched in India in the coming months. It will also get a ton of optional official accessories at the dealership level. Last but definitely not the least, talking about its price, the upcoming Meteor 350 Fireball will be priced around Rs. 1.65 lakhs, Ex-showroom, as one of the leaked picture shows the price tag of Rs. 1,68,550 but that includes some optional accessories like a tinted front visor.

What do you think should be the price of the Royal Enfield Meteor 350 Fireball and did you like the looks of this upcoming Thunderbird replacement? Share your thoughts with us in the comments below.