Royal Enfield To Launch 1 New Motorcycle In Every 3 Months; 28 New RE Bikes In The Pipeline - Details 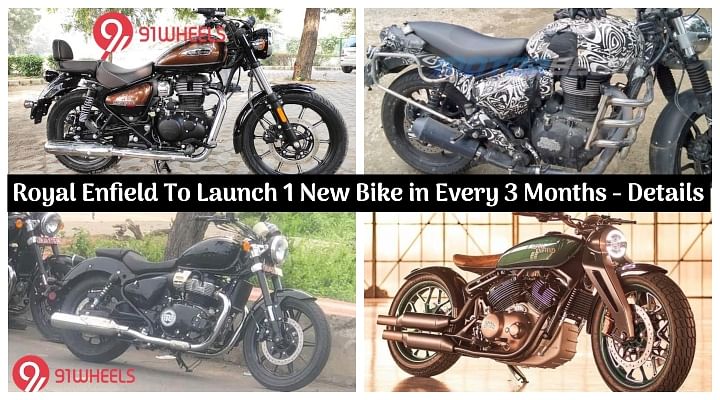 Madras-based Indian two-wheeler manufacturer - Royal Enfield recently launched the new Meteor 350 BS6 in the country. The Meteor 350 is an all-new motorcycle from Royal Enfield after a really long time and it seems very promising. It gets a new chassis, new powertrain, handsome look and loads of features that we have never seen before on any RE motorcycle till date! However, RE isn't going to stop here and this is just a new beginning. Royal Enfield is now planning to launch 1 All-New Motorcycle in every 3 months. Here, we have for you all the details about it.

As we have already mentioned before, Royal Enfield is planning to launch 1 New Motorcycle in every 3 months. The Indian two-wheeler manufacturer is aiming to launch at least 28 new motorcycles in the next seven years. The company is seeking to strengthen its position both in the domestic as well as in the international markets by launching several new motorcycles over the years according to a top Royal Enfield official. The company is also planning to set up an assembly unit in Thailand within the next 6-12 months. It will be followed by an assembly unit in Brazil in the near future.

Post the launch of the new Royal Enfield Meteor 350, speaking to ET Auto, Royal Enfield CEO, Mr Vinod K Dasari said, "We have now got a product plan for the next five to seven years. We are looking at launching a new model almost every quarter and I am not even talking variants and colour options kind of stuff...28 models at least (in the next seven years) that's the bare minimum." Mr Dasari further added, "All these (new models) will play in the mid-segment - 250cc to 750cc. That's our focus area...and we will continue to strengthen it by bringing in evocative, accessible and truly global line of products."

Mr Dasari also revealed that the company is performing very well in the global markets in terms of sales. The RE Interceptor 650 is the best-selling motorcycle in the UK since the last 12 months. Also, RE is planning to make a huge investment to develop new-age products, technology, for capability enhancement and global expansion. Are you excited for the influx of a bunch of all-new Royal Enfield motorcycles? Do share your thoughts with us in the comments section below. You can also join our 91Wheels Auto Enthusiast Telegram group (click via mobile to join) curated exclusively for the fans, enthusiasts and the owners. Further, subscribe to our YouTube channel for more such amazing motoring updates.