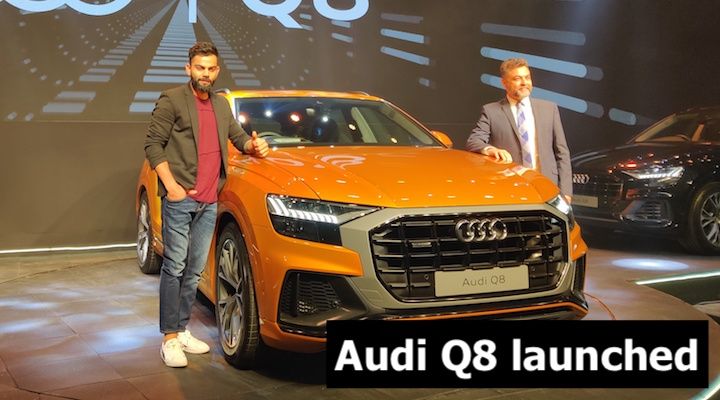 Well, it is a known fact that Audi India has been delaying its launches for a while now but not anymore. This year, the German carmaker has a bunch of line-up for the Indian market and they have kicked off 2020 with the Q8 SUV. The launch of the Audi Q8 was seen by Virat Kohli and carries an ex-showroom price of Rs 1.33 crore. And yes, he is the first customer of the Q8 in India.

The SUV replaces the Q7 as the flagship SUV and is available in a petrol engine only. The 3.0-litre TFSI, turbo petrol engine produces a total of 340 bhp along with a peak torque of 500 Nm and is in a BS6 state. Transmission sticks to an 8-speed automatic gearbox and it gets the Audi Quattro all-wheel-drive system. 0-100 km/h sprint can be achieved in a mere 5.6 seconds and the top speed sticks to 250 km/h.

What's new is that the petrol engine gets a 48V mild hybrid system. The system incorporates a lithium-ion battery and a belt alternator starter. At the time of braking, it recovers up to 12 kW of power and feeds it back to the battery. MHEV technology reduces up to 0.7 litres per 100 kilometres.

Now, coming to the design of the new flagship SUV then at the front the Q8 features the signature trapezoidal grille like seen in the A8L, except for the fact that it is now wider than before. The HD Matrix headlamps come with signature LED Daytime Running Lights (DRLs) and the coupe-like roofline surely bags an eye. Don't miss out on the pronounced air intakes seen at the front which enhances the aggressive character of the SUV.

Moving onto the side profile then the dual-tone 18-inch alloy wheels come as standard and 21-inchers are an option for those who want that extra grip on the road. The rear profile marks an agile spoiler followed by dual exhausts and connected taillights. There is a LED strip that connects the taillights.

Audi Q8 gets twin screens, one for the instrument cluster and other a touchscreen unit. The 10.1-inch large display controls the infotainment system controls and the navigation system. Another 8.6-inch screen used by driver displays air-con controls and other convenience features.

In other news, the wait for the A8L is over as Audi India has announced that the flagship sedan will be launched next month. It will also get connected features. All the cars scheduled for the 2020 line-up will get BS6 engines.