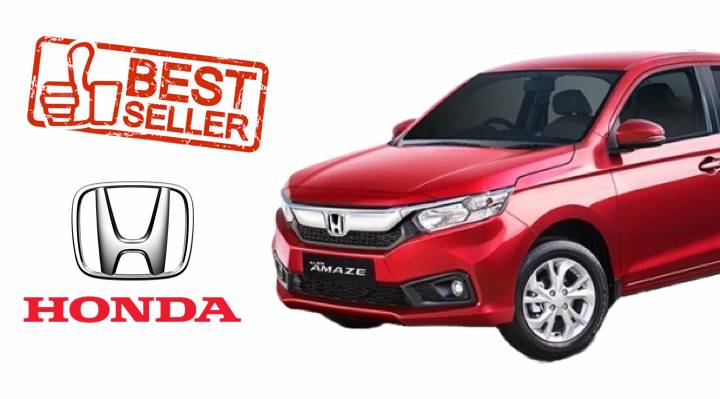 Honda Amaze is the sub-4-metre compact sedan in India which rivals with the popular Maruti Dzire, Ford Aspire, Tata Tigor and the Hyundai Xcent. Well, the latter now comes with a successor named as Hyundai Aura. But are you aware that this people's ride is the best selling car from Honda in India?

Also Read: Honda Will Not Pull The Plug Off Jazz And Here?s How We Know It ? BS6 Coming Soon!

Launched back in April 2013, Honda Amaze created a spark in the automotive industry, being the most affordable Honda sedan in India (We all know that City was the sweet spot for people but it costed more). The car was launched with the humble 1.2L petrol and a frugal 1.5L diesel engine.

The oil burner marked the entry of diesel engines for the Honda which later came with the City and other models too. This unit churned out an impressive 99 bhp of power and offered 200 Nm of peak torque from as low as 1750 rpm. The first-gen Amaze came with a 5-speed manual transmission only.

Jumping forward, the Amaze completed the crucial 100,000 sales milestone in just an year and marked its journey to becoming the 'ideal car for Indian roads to tackle any terrain' and even entered the Guinness Book of World Records. Here, the 1.5L diesel was used which covered 23,800 km in 55 days.

Sharing more details on the Amaze, it outshines other cars in the sub 4m compact sedan space when it comes to the best combination of space and comfort levels. Its boot space capacity is measured at 420 litres which is excellent for this segment. The sedan also offers 3 years/unlimited warranty across all trims and is well proportioned to its shape. These pointers work well for prospective customers.

Over the years, Honda has juiced up the Amaze by bringing in new variants and additions to the first-gen model. Like for starters, they launched an Anniversary edition when it completed a 1 lakh sales milestone. Then came in the CNG version in January 2015 which was instantly popular among cab aggregators.

To pace up with the moving technology, Honda also brought in the first-gen Amaze with the AVN (Audio, Video and Navigation) features to the top trim SX(O). In the following years, several editions were launched namely Celebration, Privilege, Special and more.

Fast forward to May 2018, Honda brought in the second generation of Amaze. The facial mask of the Amaze got a highly revamped design and the engines too were upgraded. Yes, Honda now introduced a CVT gearbox for the 1.5L diesel engine (a first in its segment).

This new design was a fusion of City and Civic from the front. It was aggressive and packed in new features. Like the LED DRLs, front fog lights, rear defogger, 15-inch alloy wheels and more on the exteriors.

On the inside, the sedan received a larger 7.0-inch touchscreen infotainment unit which supports connectivity features like Apple CarPlay and Android Auto. It also gets automatic climate control, push-button start/stop function and more.

Also, Honda Amaze is the first sedan in its segment to feature paddle shifters. These come with the petrol CVT models. This feature allows the driver to manually take control of the sedan without taking hands off the steering wheel.

Honda Amaze in its second-generation avatar comes with BS6 petrol and diesel engines. The prices for the same starts at Rs 6.12 lakh and the top-spec model fetches till Rs 9.98 lakh. All prices stick to ex-showroom, Delhi. Given the overall package, Honda's long term reliability and premium appeal, there is no wonder then that this Amaze continues to be a desirable purchase for most.