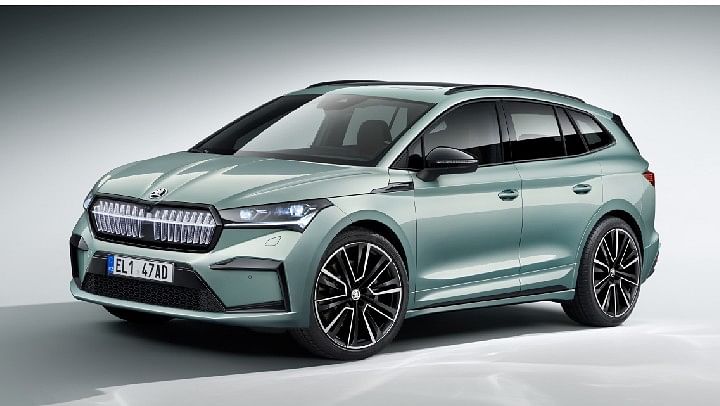 Skoda might introduce their all-electric SUV, the Enyaq iV to India sometime in 2022/2023, via the CKD route.

Volkswagen has entrusted Skoda Auto to build electric cars in India with an investment of Rs. 8000-crore. And as Skoda works on expanding its EV line-up, they are also exploring future possibilities to enter the EV market in India. Given how niche luxury carmakers have found good success with their EVs especially Skodas sister company, Audi with the e-Tron Sportback and e-Tron GT. Theres a good chance that Skoda will join the bandwagon with the Enyaq iV SUV, which will be the first EV to launch in India.

Skoda Auto global chairman, Thomas Schaefer, has confirmed that electric mobility is one of their focus areas on a global scale. Mr. Schaeffer believes that India will be a key market for developing green vehicles because of India's subsidiary policies.

As per their plan, the Indian subsidiary of the German giant - Skoda Auto Volkswagen India - plans to run 30% of their local portfolio run on electric powertrains by 2030. To achieve this goal, Mr Schaeffer has emphasised the importance of localisation, and how it will make EV feasible and affordable

But what is the Enyaq iV?

The Enyaq iV is Skodas first bespoke EV that debuted globally in September 2020. It sits on the MEB architecture that it shares with the Volkswagen ID.4. The European-spec Enyaq iV is available in five trim that is named after numbers - 50, 60, 80, 80X, and vRS. There are three battery options - 52 kWh, 58 kWh, and 77 kWh. The 50, 60, and 80 trim models come with a rear-wheel drivetrain, whereas the 80X and vRS come with a permanent all-wheel drivetrain. However, for India, Skoda will offer the Enyaq in one trim only, and that will be fully loaded. Were not sure as to which battery it will get, but were hoping it will be the bigger 77 kWh battery.

The Enyaq iV comes with iconic design elements like the traditional butterfly grille that is now illuminated, and sharp LED headlamps with L-shaped LED tail lamps. The European-spec Enyaq iV has quite the modern interior with features like a heads-up display, a 13-inch touchscreen infotainment system that supports both Apple CarPlay and Android Auto, a panoramic sunroof, a virtually fully digital instrument cluster. Both the front and second-row get heated seats, and the drives seat is power-adjustable. Further, luxury features that help keep the ride supple are adaptive chassis adjustment, and tri-zone climate control.

As far as safety is concerned, the Skoda Enyaq iV will come equipped with 9-airbags, a 360-degree camera, and advanced drivers assist systems like Blind spot monitor control, and adaptive cruise control.

Also Read: Skoda Slavia Vs Skoda Rapid - Which One Is Better?

As per the Worldwide Harmonised Light Vehicles Test Procedure (WLTP), the base 50 with the 52 kWh battery has a range of 340 km. The Enyaq iV 60 variant with the 58 kWh battery gets a range of 390 km. On the other hand, with a bigger battery at 77kWh, the Enyaq iV 80 trim does the maximum distance at 510 km.

When will the Enyaq iV launch in India, Price, and Competition?

Mr. Scaheffer has not confirmed that they will launch the Enyaq iV in India. However, they are looking into the possibilities of it and for that purpose, Skoda will introduce a few test vehicles in India to check how the car performs here.

However, if launched in India, then Skoda will bring the Enyaq via the CKD (Completely Knocked Down) route. Its price will range from Rs. 35 lakh - Rs. 40 lakh. If everything goes right, then the Enyaq iV will launch in late-2022 or early-2023 and it will directly compete against the Volvo XC40 Recharge.

Given how India has witnessed a rise in EV sales this year, are you planning to buy one? And if not, then what are the reasons? Let us know in the comment section. You can also join our 91Wheels Telegram and 91Wheels Whatsapp group to know more about vehicles, conduct discussions on your favourite ride and much more! Also, you can subscribe to our Youtube channel for video content on the latest from the world of cars and motorcycles. Also, connect with us on Facebook, Instagram, and Twitter for more about vehicles!