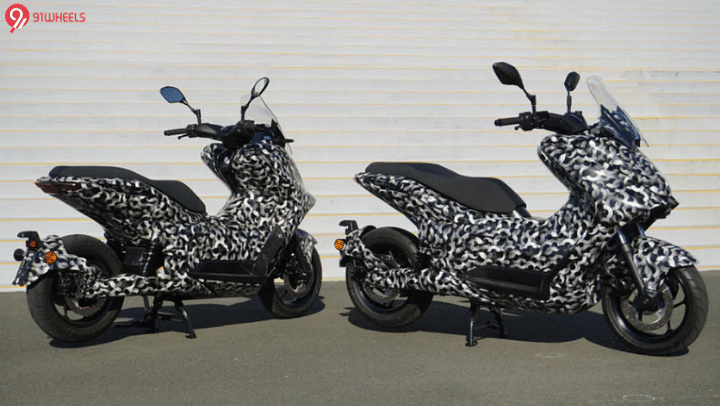 At the 2019 Tokyo Motor Show, Yamaha Motors unveiled the concept of its EO1 e-scooter.  According to Yamaha, the e-scooter will be as powerful as a 125cc scooter. It seems that the electric scooter is ready to hit the production house as it is being spotted in Japan.

The EO1 spied looked quite similar to its concept however, the test mule was completely camouflaged. The major change spotted was the seat design which now looks more comfortable than the one seen in the concept model. Other than this the rearview mirrors and front fenders are also tweaked a little. Yamaha EO1 electric scooter will ride on 13-inch alloy wheels with dual-channel ABS.

The e-scooter is expected to be a feature-loaded one that will come with a keyless start/stop switch and will also have various ride modes - Eco, Power, and Sports that will be offered as standard. The instrument console looks like a basic LCD compatible with bluetooth connectivity that just seems to display battery status, clock, range, and speed. The estimated range that was spotted on the display showed 70kms on a single charge.

According to the officials of the company the EO1 is expected to launch anytime by March 2022. The e-scooter will be first launched in Europe followed by the United States, China, and later in Japan as well. There is a very less possibility that the electric scooter will be launched in India.

Information about the performance of the EO1 is yet to be revealed however, it is expected that Yamaha will launch best-in-class performance. The electric scooter is ready for production.

Join our 91Wheels Telegram and 91Wheels Whatsapp group to know more about vehicles, conduct discussions on your favourite ride and much more! Also, you can subscribe to our Youtube channel for video content on the latest from the world of cars and motorcycles.