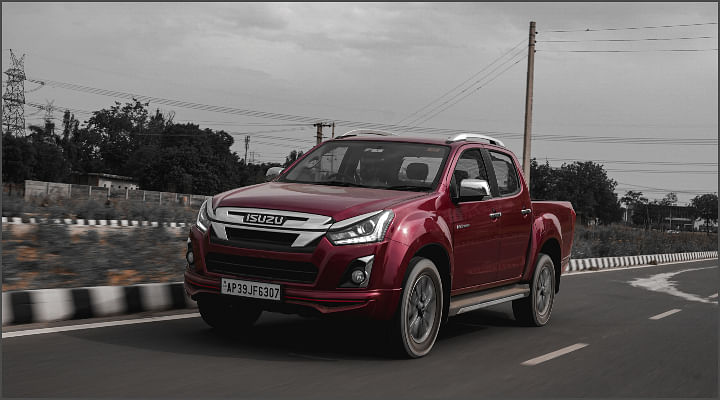 Not every day one gets to drive a 2-ton pick-up truck and that too in Delhi-NCR! I drove both, T-Hilux and V-Cross and I'll share my opinion on the V-Cross as I got to drive it for more than 100+ kms, both on and off-road. Here are my observations about the Isuzu D-Max V-Cross AT -

The suspension of the V-Cross is stiff but believe me, Hilux's suspension is stiffer. Harder is the right word. V-Cross behaves well on both tarmac as well as non-tarmac roads and keeps the passengers at ease. However, V-Cross is bouncy. Yes, on the off-road trails we went, the suspension kept me and my co-passenger happy but oh, the bounciness. That can be a problem for some. My editor was driving the Hilux and he was happy with its suspension as it doesn't bounce much and held itself firmly over those surfaces. But did I mention that it is much stiffer than the V-Cross?

Well, this is the last thing you would want to know but it is the second-best thing about the V-Cross. In my 60 km run from home to office, V-Cross returned an astonishing 15+ kmpl. Don't believe it? Even I didn't but that's what the MID displayed. Sadly, I was focused on concentrating on the road that I forgot to click a picture. T-Hilux is a gas guzzler if you're wondering.

Yes, when compared to Hilux it is quite smaller but the 1.9L does the job right. It gets 163 hp of power and 360 Nm of peak torque feels enough. I had the 6-speed AT and the gearshifts happen at 1850-1900 RPM with a light right foot. There is a bit of lag and the engine roars way too much when you pedal to the metal but then that can be neglected because not everyone drives in a spirited manner in an everyday manner. The best thing is once you're at speeds above 40-50 kmph, the engine noise reduces and the NVH levels are well contained.

I also drove the Hilux and that engine and gearbox combo is a gem. 201 bhp of power and 500 Nm of peak torque is just marvellous. The 6-speed AT is smart enough to understand the pedal response and the gearshifts happen quite smoothly. Also, the NVH levels on this truck are far better than the V-Cross offers. Anyway, I mostly drove the V-cross so keep reading more about it.

This is not a regular vehicle. It is a pick-up truck. So on the roads, one has to keep their hooligan style in the back seat so they can enjoy the experience at its best. I had the 6-speed AT and yes, the brutal low-end torque is observed from as low as 2,000 RPM. However, the torque delivery isn't linear from the start and in fact, post 1,500-1,600 RPM you will be able to enjoy the truck. Nonetheless, this 1.9L diesel unit is more than sufficient and does your city and highway drives like a breeze. Plus, it is economical.

I can live with the steering of V-Cross. But can't say the same for the Hilux. The latter is quite heavier. At city speeds, manoeuvring the Isuzu is like a child's play. Okay, not literally but still, it is manageable. Yes, at 3-point turns your arms would still get worked up but hey, I'll say it again, it is a pick-up truck. And it is manageable. The steering response is sharp and at highway speeds, it weighs up thus giving the driver the confidence they need.

Although it would be silly to mention this point still, once you're behind the wheel of it, you can literally see everything. People of short height will definitely enjoy the view. When we were driving the V-Cross from traffic-ridden roads of Delhi-NCR, people were noticing it. So yes, if you are someone who likes to stand out from the crowd, this is it!

Believe it or not but the V-Cross has better space at the rear than the Hilux. The cabin is roomier and gives you all the space that you are looking for. Still, I'll suggest that this second row be used by two people only.

At this pricing, my mind and heart says the Hilux but the Isuzu D-Max V-Cross has got the 'eat anyone up' attitude. The front fascia is quite aggressive compared to the Hilux and has also got the right stance. Sure, this design is dated and the newer V-Cross looks better but I will be sharing about the one that is offered in India only. Still, design is quite subjective so I'll let you make a wise call.

Things that could have been improved -

I strictly believe that it is far overpriced from what the truck has to offer. Rs 27 lakh, ex-showroom, Delhi for this. Are you kidding me? Yes, the engine is good, mileage is even better, good suspension but no, I'd not put my money on this at all.

The reason I mentioned the price first was to follow up with the lack of modern features and premiumness. There is auto down for the driver but no auto up. There's no auto IRVM, the touchscreen is laggy and would you believe when I say that Isuzu has replaced the 7-inch touchscreen recently? Oh, this new 9.0-inch now finally receives Apple CarPlay and Android Auto. T-Hilux effect? I think so. In comparison, Hilux has auto up and down window function in all doors, soft-touch material on the dashboard that makes the cabin premium and hey, the touchscreen isn't laggy. These are only some of the things that I've mentioned.

Sit inside and look anywhere, you will find cheap plastics. Yes, we all know that Isuzu has a reliable engine and it'll last a lifetime but hey, people at least deserve some comfort in here and should feel good after spending close to Rs 30 lakh OTR.

While the backrest angle on the Isuzu D-Max V-Cross feels good, however, if you're a taller person like me then the lack of under-thigh support will definitely be a concern for you. Also, the cushioning here does not feel good. Maybe, I had the variant that gets fabric seats but still.

In comparison to the only pick-up truck offered in the market (T-Hilux), Isuzu has quite some catching to do. Toyota has good coverage of dealerships, service stations and the after-sales support of the carmaker is better than what Isuzu offers currently.

Will I spend close to Rs 30 lakh for the Isuzu D-Max V-Cross? Absolutely not. Had it been cheaper, I would have thought but with this staggering price, I will definitely put in extra money and go with the T-Hilux. Not only does it offer more features and comfort level but it is a new model with 201 horses under the hood.

Join our 91Wheels Whatsapp and 91Wheels Telegram group to get the latest updates from the Indian Auto Industry. 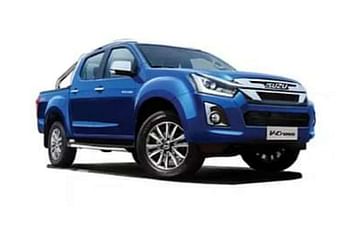