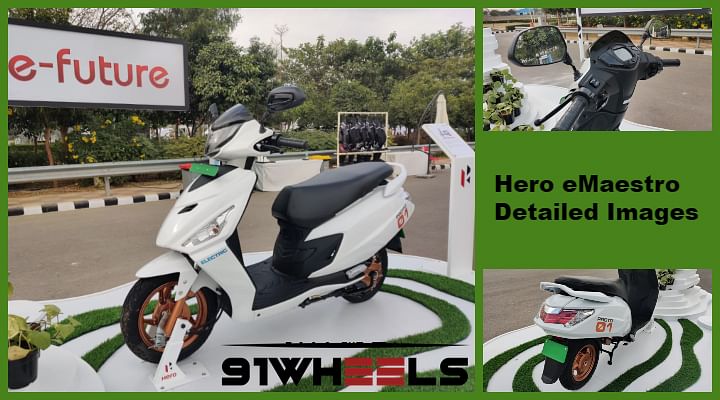 Hero Motocorp showcased an array of their new and updated bikes at the 2020 Hero World. Some new launches like the Xtreme 160r and the new updated BS6 bikes and scooters were showcased as well. At the same event, Hero Motocorp also showcased their upcoming full electric Maestro scooter which is called the eMaestro Proto concept at this stage. We tell you everything about the first Hero electric scooter.

The Hero eMaestro Proto electric scooter will be based on the Maestro 125 and it is expected to get launched this year itself. We have brought you the detailed real-life pictures of the upcoming eMaestro scooter. The looks will be similar to the regular Maestro edge but it will have some unique features up its sleeves to be different. Talking about the design first, it gets a masked-out LED headlight on the front and golden telescopic forks at the front. As the scooter is still in development, we can't reckon the actual looks and features when it hits the road later this year.

The rest of the design and body panels are identical to the Maestro. The only major highlight is the golden coloured wheels, shock absorbers and rear hub-mounted electric motor. It will also get an all-digital instrument cluster. One interesting quirk of the eMaestro is that the full left handle grip is movable and you have to rotate it to select the gears like reverse, neutral and drive. It is very similar to what we have seen in old geared scooters like Chetak and many buyers will like this touch. The eMaestro will also get cloud connectivity and smart keyless operation.

Hero Motocorp haven't revealed any deets on powertrain and battery capacity, which means we have to wait for the final figures. But we can expect that it will get a battery fitted under the footboard and a permanent magnet hub-mounted motor. Our editor, Bunny Punia took a quick spin around the test track and came back might impressed with the initial punch from standstill to 50km/h.

Once launched, Hero's electric Maestro it will rival scooters like Ather 450, TVS I-cube, Bajaj Chetak and other electric scooters. One thing to note that Hero Motocorp and Hero Electric are two separate entities and they don't share their technologies and products. We can expect some technology carried from the Ather brand as Hero holds a good stake in Ather Energy.