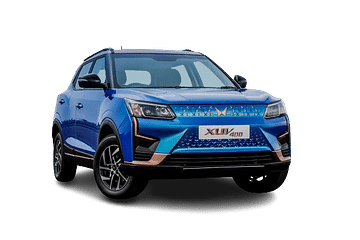 Last Updated On 24'Jan 2023: Mahindra has revealed the prices of XUV400 Electric. To be made available in two variants i.e. EC & EL, the electric SUV from Mahindra is priced between Rs 15.99 Lakhs to Rs 18.99 Lakhs (ex showroom). The XUV400 electric will compete with the Tata Nexon EV Prime and Max, XUV400’s bookings have begun from 26th January, and deliveries will  begin from March. The prices are introductory and valid for the first 5000 bookings for each of the two variants. Mahindra has started virtual test drives of their first ever e-SUV, the XUV400. Physical test drives are scheduled for Jan or Feb 2023 and a later before April 2023.

Mahindra XUV 400 Electric Launch: Mahindra has now confirmed that the XUV400 EV wil be launched by early 2023, most probably at the 2023 Auto Expo. The car was showcased first at the 2020 Auto Expo and will rival the Tata Nexon EV.

The eXUV 400 was showcased at the 2020 India Auto Expo as a concept vehicle. However, a heavily camouflaged model of the same was spotted being tested in Chennai, which is indicative of one thing its launch is nearing. The five-seater EV will compete in a segment that includes rivals like Tata Nexon EV, and the MG ZS EV. Below we have discussed some of the details of the upcoming eXUV 400 that we have observed, in both the concept vehicle and the camouflaged test module.

The overall exterior silhouette design of the eXUV 400 is not a huge leap from its petrol counterpart, the XUV 400. There can be no doubt, whatsoever, that the EV is based on the same platform as the XUV 400. The redesigned front fascia of the concept vehicle showcased a unique closed grille, flanked by futuristic-looking headlights at both ends. But the side profile of eXUV 400 looks unmistakeably its petrol counterpart, same for its rear profile as well. Mahindra might also offer the EV with blue accents, as was visible in the concept version.

Just like the exterior, the interior of the eXUV 400 is also expected to retain the same appeal found in the XUV 400. However, the EV could equip an infotainment screen larger than the 7-inch unit present in the regular model. Minor changes on the floor panel are expected to accommodate the battery pack. This means that the vehicle's weight will increase; however, ground clearance didn’t seem to be that compromised in the concept vehicle. Aside from that, the overall cabin of the eXUV 400 will not be an evolutionary leap over its petrol counterpart.

The official feature list of the eXUV 400 is yet to be finalized. However, some of the possible features might include, connected car tech, sunroof, rain-sensing wiper, dual-zone auto climate control, etc. Just like its petrol counterpart, the eXUV 400 will also be high on safety, with features like multiple airbags, cornering brake control, Anti-Brake System with Electronic Brake Distribution.

Being an EV, the Mahindra eXUV 400 will be powered by an almost 130 bhp electric motor that will power the front wheels. The motor is expected to draw its power from a 40 kWh battery pack, which is capable of delivering a range of 400 km on a single charge. The exact technical specifications are yet to be confirmed. But Mahindra has confirmed the electric SUV will be the first of its kind to feature battery cells developed exclusively for Indian applications by LG Chem, a Korean battery manufacturer. Mahindra has collaborated with the company to develop advanced lithium-ion battery technology.

Mahindra and Mahindra recently announced that they are looking to launch the eXUV 400 in quarter-3 or quarter-4 of FY-23. Expect the electric SUV to be priced from Rs. 15 lakh (ex-showroom) onwards.

Performance of XUV 400 Electric is backed by a Automatic transmission and FWD configuration.