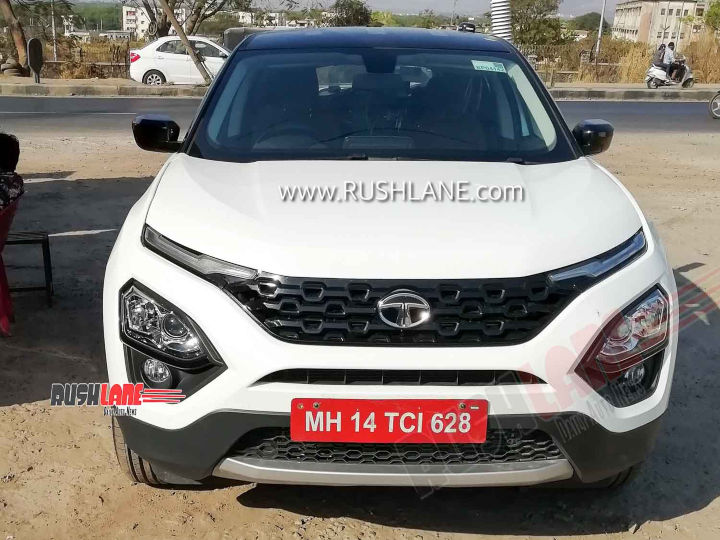 We earlier shared details about the Tata Harrier petrol and just a few days after, a spy image for the same has been spotted on Indian roads. The upcoming SUV was spied in a white shade with black contrasting roof and portable emission test rig.

Currently, Tata Harrier is sold in a sole diesel engine which gives it's competitor, MG Hector and Jeep Compass an advantage as they come with a petrol engine. Harrier manages to pull 700 average units on a monthly basis in sales.

Sharing more details on the upcoming version of the Harrier then it will use a 1.5-litre petrol unit which is expected to churn more than 150 bhp. Also, this engine is a four-cylinder advancement to the current 1.2L petrol which is seen on the Tata Nexon.

The transmission sticks to a 6-speed manual and an automatic with paddle shifters may be expected at a later stage. Like the diesel engine, Harrier petrol will also come with several drive modes and might carry Sports mode which will boost the performance.

We expect that this petrol engine will also be seen in the Gravitas too, 7-seater version of the Harrier which was showcased at the 2020 Auto Expo. Like said above, the sales with the introduction will surely improve for those looking for petrol. It's rival, MG Hector 50% of sales come from petrol buyers.

MG Hector comes with a 1.5L turbo petrol engine which also comes in a hybrid form and it churns 143 bhp on tap. Likewise, the Jeep Compass uses a smaller 1.4L petrol engine but produces 163 bhp. Also, the next-gen Mahindra XUV500 will come with a more powerful 2.0-litre petrol engine. The competition is fierce in terms of SUVs and the customers are not shying away buying the petrol versions for the same.