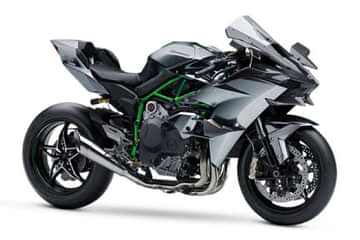 Last Updated On 16th Jun’22: The Kawasaki Ninja H2R is one of India's most expensive superbikes. The superbike, which debuted in 2021, has all of the features you'd expect from a motorcycle.

The Kawasaki Ninja H2R is one of the most acclaimed and popular products from Kawasaki on sale in India. There is only one version on sale and comes with a sticker price of Rs 79.90 Lakh. The Kawasaki Ninja H2R generates a max power of 231 PS @ 11500 rpm along with a peak torque of 141.7 Nm @ 11000 rpm and the engine is mated to a 6 Speed speed gearbox. Some of the main rivals include BMW M 1000 RR, Ducati Panigale V4 SP2 and Honda Gold Wing

Performance of Ninja H2R is backed by a Manual transmission.