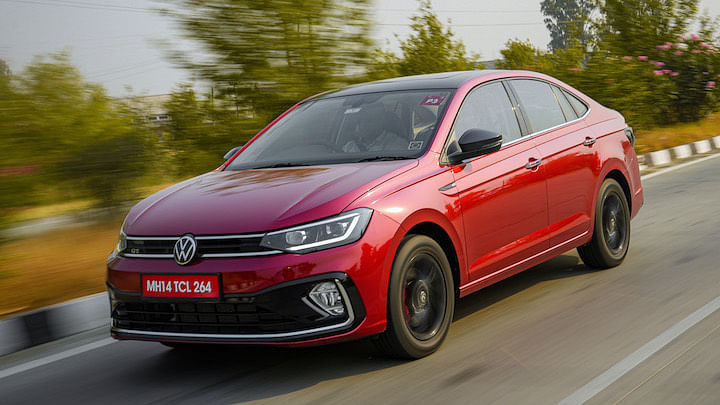 Sedans never went out of fashion in India. Yes, most of us have been putting down our money for SUVs but certain three-box cars have always remained popular. Volkswagens own Vento had a cult following thanks to its dynamics, powertrain and the safety parameter. However, with increasing competition (from both sedans and SUVs), an all-new offering was in place and this is what I drove a few days back. Its almost identical to the Skoda Slavia (part of the same automotive group) but should you be walking into Volkswagen showrooms soon?

I will get to the point straight away. The Virtus powertrains have been making headlines lately and for the right reasons. There are two motors to pick from and these include the smaller 1.0 TSI and the larger 1.5 TSI engines. For this review, we will talk about the latter only. At 147 bhp (150PS) of power and 250 Nm of torque, there is nothing more powerful you can buy in this segment. Apart from the Slavia ofcourse. We had the 7-speed DSG automatic model in top spec GT variant and from the word go, I had a grin plastered across my face.

Our drive experience was in and around Amritsar which meant the Virtus would be driven on open four lane highways. However, the initial half hour gave me ample opportunities to sample the engine in urban conditions. Part throttle response, something we all use in traffic, works oh-so-well. There is oodles of torque available from lower revs and this means fewer gear shifts and respectable fuel economy figures. The engine tends to spin in the lower range and remains silent enough.

However out on open roads, it doesnt take too long for the Virtus to hit illegal speeds. In our test run (GPS based), the sedan took 9.59 seconds to clock 100km/h from a standstill. Had the initial launch been better, 9 sec would be possible. But its not just the outright punch that keeps you happy but the ability to overtake fast moving traffic and chew up miles rapidly. This will be a great choice for a cross country run. The tall 7th gear comes in at just under 80km/h and with a light right foot, you can initiate cylinder deactivation. With this, two of four cylinders turn off, thereby increasing fuel efficiency by a big margin. Expect as much as 20kmpl at cruising speeds of 85-90 km/h. Not bad, eh?

Th Virtus also comes with paddle shifters (for the 1.0 AT too) and this helps with even quicker response from the DSG unit. Before I move to the next parameter, its worthy of a mention that the motor sounds great at higher revs. Definitely brings a smile on your face!

Agile on its feet?

The initial feedback from the Virtus is positive. While this route was completely devoid of mountain roads or winding stretches, the day long drive did leave a good impression. For starters, the suspension set-up definitely feels comfortable over broken roads. Though the sound does filter into the cabin, overall ability to absorb undulations is impressive. This along with a light steering makes urban runs a breeze. And if you thought sedans dont offer good visibility for drivers, you need to test drive the Virtus. Even for short drivers, the view is good and large windows further ensure you dont feel nervous in congested traffic.

Out on open roads with the speedometer registering triple digit speeds, the confidence from the chassis is excellent. Lane changing, overtaking heavy commercial traffic or the occasional cross winds dont bother the Virtus much. Road noise is well under control too. Frankly, for the dynamics part, I will reserve my judgement till we take this car around a set of bends or twisties. One thing I would have preferred here would be rear disc brakes. With so much performance on tap, this should have been part of the package.

Step inside and the overall black theme for the GT variant looks impressive. However, this is the initial impression. Soon you do notice the hard plastic panels on the fascia and the door pads and this might not go down well with owners putting down over 15 lakh for a sedan. That said, the layout is similar to that of the Taigun and looks nice. The screen and central console is tilted towards the driver, further hinting at what this car stands for.

Seats are finished in black along with red stitching and offer ventilation as standard. The same red contrast can be seen along the width of the dashboard and some part of the door pads. The idea is to give a sporty them and I think it works well. The large cockpit offers a lot of information though we couldnt find out a way to reset the trip meter here. This function has to be performed from the central touch screen. Likewise, the hazard light switch (for all four indicators) has an odd placement.

The seats do offer good comfort and other ergonomics are spot on. Apart from two c-type charging outlets, VW has also provided a 12V socket next to the cup holders. Visibility for drivers is good and with a 6 foot tall person up front, there is about 1-2 inches of headroom left. The sunroof also aids in imparting a sense of airiness in the cabin.

At the back, things remain good. There is about 3-4 inches of knee room on offer for a tall rear passengers when the front seat is adjusted for an equally tall driver. The City and Ciaz do offer more space but standalone, the Slavia is way more spacious than the car it replaces. There is also ample width (and a dedicated head rest) for a third passenger. That said, headroom is not sufficient for a tall passenger or for my Punjabi friends who wear a turban. In terms of features, you get dual C tyre charging outlets, air-con vents and seat pockets at the back of both front seats.

The Virtus looks great, no two ways about it. The GT version further ups the ante, specially in this Wild Cheery Red shade. Volkswagen offers similar (more) bold colour options and these will go down well with enthusiasts. The black treatment for alloy wheels and red finish for the calipers might seem a tad too flashy for some, but I love it when manufacturers experiment with aesthetics.

On the move, the Virtus looks classy. And sporty. There is generous use of glossy black and chrome elements up front and the sharp DRLs are eye catchy. The overall silhouette is low and wide but its the rear that needs a special mention. The GT variant also gets a little spoiler on the boot and the execute of the tail lamps is simply stunning. Look at the Virtus at night and you will get my point.

Do note that the Virtus is longer and wider than the Vento. Among all its current rivals, it remains the longest as well.

The Volkswagen Virtus satisfies a lot parameters that a prospective sedan owner looks for. It looks great (and sexy!), has sufficiently spacious interiors, feels solid and drives even better. At the same time, for a top spec model, some features are missing. Powered drivers seat and a 360 degree camera for instance.

If your main requirement is for a spacious chauffeur driven sedan, look elsewhere. But for most other needs, the Virtus 1.5 GT ticks the right boxes. Just wish VW brings this motor with a manual gearbox too. Fingers crossed! 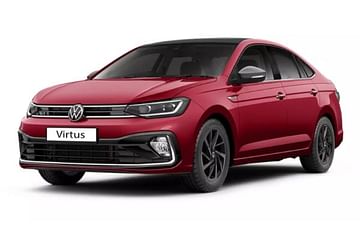