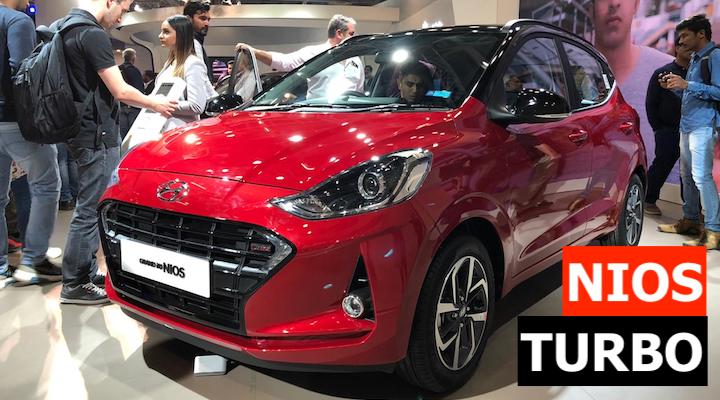 Hyundai showcased the Grand I10 Nios Turbo at the 2020 Auto Expo and now, it has been launched at a price of Rs 7.68 lakhs. It will only be available in Sportz variant with either a single tone or dual-tone colour scheme.

However, the launch hasn't been officially announced by Hyundai but according to a media report by Rushlane, it has been launched and prices start at 7.68 lakhs. The Turbo variant will get power from a 1.0-litre three-pot turbo petrol producing 100 ps and 172 Nm of torque. Unlike the Venue, it will be paired with only a 5-speed manual.

Talking about the changes first, Turbo variant will get a gloss black front grille with Turbo badge. The exterior has also received an all-black roof along with blacked out ORVM and blacked-out A, B and C pillars too. The boot lid also gets a Turbo badging at the edge. The interior sports an all-black dashboard with red inserts on AC vent surrounds. The seat covers and the steering wheel also gets red stitching. This same cabin combination can be seen on the Aura 1.0 turbo as well.

Hyundai Grand I10 Nios Turbo doesn't sport any mechanical change except for the engine. Other mechanicals like steering and suspension are the same as before. Since both the Baleno RS and Tiago JTP are discontinued, Grand I10 Nios don't have a direct rival and it ends up being the only turbocharged hatchback in India at this price point.

Will you consider the Nios Turbo over Maruti Swift, Ford Figo, Tata Tiago and Maruti Ignis? Tell us in the comments below!