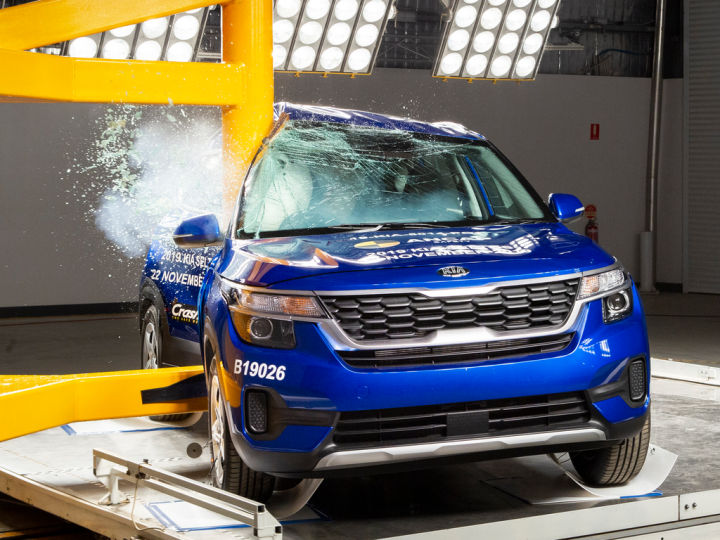 Kia Seltos has recently been crash-tested by ANCAP (Australian New Car Assesment Program) in which it scored 5 stars. The adult occupant protection came out to be 85%, child occupant protection at 83%, 70% score in safety assist and 61% in vulnerable road user protection.

Kia Seltos is the smallest SUV in Kia Australia's lineup and Kia imports it from South Korea and sells it in the Australian markets. Features like 6 Airbags, ABS with EBD, Lane-keeping assist, lane departure warning, autonomous emergency braking, emergency lane keeping and tyre pressure monitoring system are standard. The Indian spec Kia Seltos, on the other hand, comes with 2 airbags, ABS with EBD, rear parking sensors and speed sensing alarm as standard.

Seltos sold in Australia has larger engines that include a 2.0 litre NA petrol engine with 147 bhp of power while the other one is a 1.6 litre T-GDI petrol with 174 bhp of power on tap. The Australian spec Seltos is also available in AWD variants. Indian spec Seltos comes with a 1.5 NA petrol, 1.4 T-GDI petrol and a 1.5-litre diesel engines paired with IVT, 7-speed DCT and 6-speed AT accordingly.

Although we can't judge the Indian spec Seltos with these results, if we consider the structural rigidity of both the cars as same, we can expect a good rating in Global NCAP crash test which tests the Indian cars under #SaferCarsForIndia campaign.

What's your bet on the crash test rating of the Indian spec Kia Seltos, Tell us in the comments below!