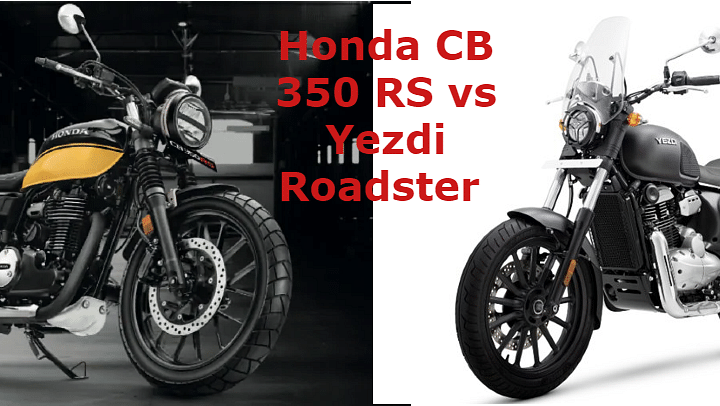 Both the Yezdi Roadster and Honda CB350 RS are sporty cruisers in their own rights. But which one sounds good one paper?

Classic Legends owned, Yezdis revival has not been anything short of any occasion. The combination of three different motorcycles, with distinct characteristics, gives customers the benefit of different riding styles. Starting off this revived line-up is the new Yezdi Roadster, a 334 cc engine sporty motorcycle that competes in the popular cruiser segment. It looks modern and stylish and has an engine that sounds quite powerful, courtesy of its twin exhaust outlet.

Also Read: Top 5 Things You Should Know About the new Yezdi Roadster

But when it comes to all these above-mentioned credentials, the Honda CB350 RS will remind you to fit the bill exactly. Not only is it modern with Bluetooth connectivity, but it also feels equally agiler than their common rival, the Royal Enfield Classic 350. So, which one of these bikes is a better deal and worth the investment, based on their spec sheet?

The Yezdi Roadster is built around a double-cradle frame, with a seating position that feels relaxed. The handlebars are wide, with the buttons neatly. The small LED headlight unit upfront will remind you of a certain H-D. Besides, the USB charging slot with C-type, and the single-LCD unit keeps the bike modern. You also get Bluetooth connectivity, but as an option. The body suspends on 41 mm telescopic forks up front and twin gas-filled emulsion rear shock absorbers, with 100 mm of wheel travel.

The Roadsters overall design has its share fair share of iconic traces. The shape of the fuel tank, and the mid-panel under the riders seat, along with the overall silhouette will remind you of the RoadKing. In this case, Yezdi is not shying away.

The Honda CB 350RS, on the other hand, sits on a half-duplex cradle frame with a bit more aggressive seating stance. The handlebars are 4 mm wider and are further mounted 4 cm away from you. The footpegs are 112 mm behind and are placed 1.2 cm higher. The body suspends on telescopic forks up front, but twin hydraulic absorbers at the rear, instead of gas-filled units in the Yezdi. The iconic Yellow-black paint scheme and the HONDA badge in words, instead of the logo, are the iconic design elements that stand out. But with just two paint schemes, it falls short of the Yezdi Roadster, which has three exterior paint options, and two chrome options as well.

Feature-wise, the Honda CB 350RS comes standard with an analogue instrument cluster, that displays Torque control, ABS, Side stand indicators, gear position, and distance to empty, with real-time mileage. The display panel further gets 5 preset modes for ease of vision. Both the bikes also come with dual-channel ABS as standard.

Just like the Scrambler and the Adventure, the Roadstar is also powered by the same 334 cc engine sourced from the Jawa Perak. But in the Roadster, it is the tune to produce the lowest power and torque figures of the two. With 29.2 Ps@7300 rpm, and maximum torque 29 Nm @6,500 rpm, Yezdi has mapped the ECU with a distinct linear flat curve, along with a 6-speed manual transmission, the Roadster seems perfectly suited for long-distance cruising. Braking duties are handled by 320 mm disc brakes with floating callipers at the front, and 240 mm disc brakes with floating callipers at the rear, both brakes come with ABS assistance.

The Honda CB 350RS on the other hand shares the same 348.36 cc engine from the Hness 350, without any tunings changes. The engine itself is new, though, and its specifications are more similar to the RE Classic 350. It produces 21.07 Ps and 30 Nm@3000 rpm. With torque peaking as early as 3000 rpm, the CB350 RS feels well suited inside the city. But on the highway, at higher speeds, itll lack the ability to overtake cars. The brakes on the CB 350RS are almost similar to the Roadster's at 310 mm disc brakes with floating callipers at the front and 240mm discs with floating callipers at the rear.

Also Read: 5 Things You Should Know About the Yezdi Scrambler

The Roadster is a modern-looking motorcycle that promises to be a lot of fun. It might use an engine, also used by its peers, which has been tuned to give it its own character. Unlike, the Honda CB 350RS, which offers nothing new as such, aside from looking aesthetically appealing. It still fills like riding the HNess 350. The competition eventually boils down to Hondas refinement and Yezdis potentiality. And in this case, the Roadster is quite ahead of the CB 350RS.

So, which one of the above bikes sounds more promising, based on the spec sheets? Let us know in the comment section. In the meantime, do join our 91Wheels Telegram and 91Wheels Whatsapp group to know more about vehicles, conduct discussions on your favourite ride and much more! Also, you can subscribe to our Youtube channel for video content on the latest from the world of cars and motorcycles. Also, connect with us on Facebook, Instagram, and Twitter for more about vehicles! 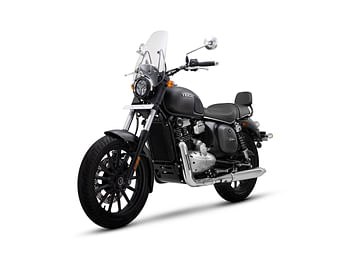