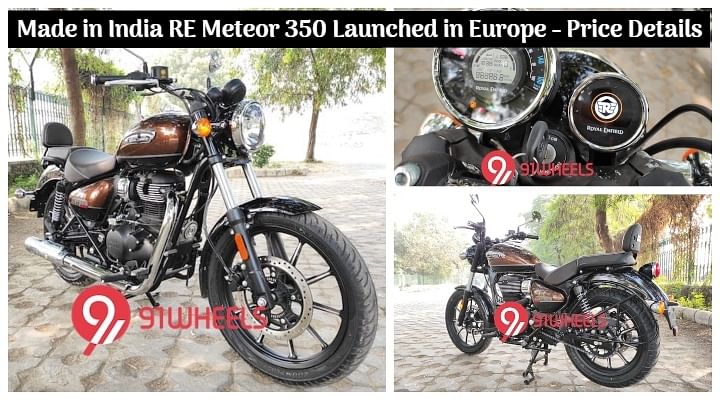 In India, the all-new 2020 Royal Enfield Meteor 350 BS6 is available in three variants. They are Fireball, Stellar and Supernova with prices starting at Rs. 1.75 lakhs and it goes all the way up to Rs. 1.90 lakhs. All prices stick to Ex-showroom Delhi. The company has launched all the variants of the all-new Royal Meteor 350 in the European markets too. In Europe, the price of the new Meteor 350 starts at GBP 3,749 (British Pound Sterling) and it goes all the way up to GBP 3,909 (British Pound Sterling). If we convert the prices of the motorcycle into the Indian currency INR (Indian Rupee), so the all-new Royal Enfield Meteor 350 is priced between Rs. 3.67 lakhs - Rs. 3.82 lakhs in the European markets.

The company is directly exporting the Made in India Royal Enfield Meteor 350 to the European markets like the United Kingdom, Italy, etc. The Meteor 350 sold in Europe and the India-spec model are completely identical. There are no mechanical or cosmetic changes or feature add-ons and the Meteor 350 is also A2 compliant. The new Royal Enfield Meteor 350 is powered by an all-new J-series BS6-compliant 349cc, single-cylinder, air and oil-cooled engine with an electronic fuel-injection system. This motor churns out 20.2 PS of maximum power at 6100 RPM and 27 Nm of peak torque at 4000 RPM. This new engine comes mated to a five-speed manual gearbox. RE claims that this engine has a balancer shaft to reduce vibrations to a great extent.

The Meteor 350 is a very feature-loaded motorcycle. In fact, it is the most technologically-advanced Royal Enfield motorcycle we have ever seen to date! The Meteor 350 is based on the company's new J1D platform and gets a new twin downtube spine frame. For braking duties, the motorcycle gets disc brakes at either end with dual-channel ABS. The suspension duties are performed by 41 mm telescopic forks at the front and dual spring-loaded shock absorbers at the rear. The RE Meteor 350 is also available in several colour variants. What are your thoughts on the new Meteor 350? Feel free to share your opinions with us in the comments section below. You can also join our 91Wheels Auto Enthusiast Telegram group (click via mobile to join) curated exclusively for the fans, enthusiasts and the owners. Further, subscribe to our YouTube channel for more such amazing motoring updates.