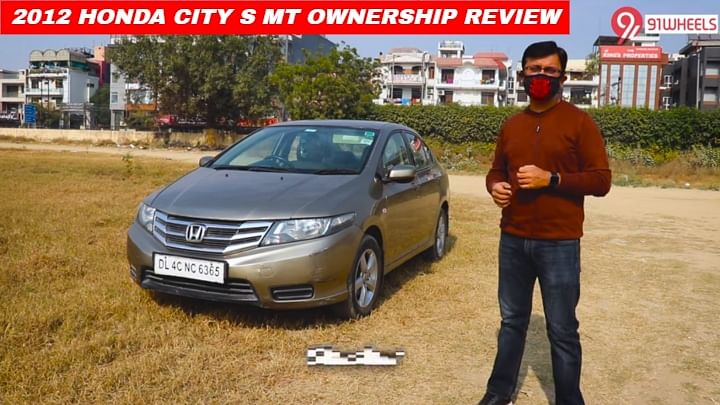 Honda City has always been the pinnacle of reliability and performance in its segment. The Japanese motor offers bullet-proof reliability and the bragging rights of V-TEC! Today we have the 2012 Honda City S MT petrol which is owned by Shishir and he will give the ownership review of the car. The car has clocked over 87,000 km on the ODO and given no issues till now.

The car is mostly used in the City which in question is Delhi. The City was an update of the Swift Shishir used to own before and he bought the City without looking for any other competitors. As the car is driven inside the city most of the time, average fuel economy remains between 7.5-8.5 km/l. However, on the highways, it returns around 14-15 km/l which is quite respectable.

The Honda City has always been the most comfortable sedan of its segment and that's the main highlight from the owner as well. The seats are said to be very cushiony so that you aren't given severe back pain after a long drive. Even the ride quality is very supple and it is very comfortable inside the city. The engine which in question is a 1.5-litre petrol engine feels zippy inside the city and offers a great driving experience. The boot space of the car is very accommodating and the rear seat space is very generous too.

The biggest con in the eyes of the owner in these 8 years is the servicing. Not only the service cost is expensive, but the spares cost a lot too. Yearly service moves in the region of 8000-10000 Rs. Moreover, there are some glaring omissions in terms of features like automatic climate control and electric functioning of ORVMs. Overall Shishir shares a positive ownership review of his 2012 Honda City petrol and you can surely go for one, but be prepared for slightly expensive service and spares.